The Adventure Team was a special mission force for the United States military. Outfitted for action and led by Joseph Colton, the Adventure Team assembled mission specialists to tackle threats anywhere from the four corners of the Earth... and beyond. They'll dare anything and risk everything!

The Adventure Team ceased operations later on, but it served as the model for the later Joint Services Special Counterterrorist Group, which was named G.I. Joe in honor of Joe Colton.

After Atomic Man and Bulletman joined the team, they were dubbed the Super Adventure Team. In the 1990s, they were briefly re-christened Adventure Force!

The Adventure Team was inspired by the exploits of Sgt. Savage and his Screaming Eagles. Threat Matrix 1 of 4 Formed in 1982 Crisis Intervention

, G.I. Joe and Mayhem appear to be some of the teams earlier members. Following the loss of several members, Joe rebuilt the team with the additions of Atomic Man, Bulletman, and Stalker. Stalker profile The addition of less militaristic members earned this new incarnation the nickname of "Super" Adventure Team. Bullet Man profile At some point in their history, the Adventure Team met Britain's own hero, Action Man! Secret Raiders

Unlike their successors, the Adventure Team was known to the public at large, and even had toys made of themselves. Duke owned some. Homefront, Part 3 of 5

One of the Adventure Team's missions brought them to the Tomb of Amtoltec in Dashur, Egypt to rescue Garrison Kreiger. When they arrived, they were besieged by evil robotic mummies, which Joe and Stalker recognized as IRON Troopers. Joe ventured inside the pyramid while the rest of the team remained outside, fighting off hordes of Troopers. In the tomb, Joe discovered a cassette player belonging to Dr. Elliot Marsh that, after being dropped down a chasm, transformed into Soundwave. Soundwave attacked Joe, but he was saved by Mayhem. The two followed Soundwave, leading them to a chamber containing the Talisman... and Kreiger, manipulating the Talisman and the IRON Troopers! The rest of the Adventure Team arrived and began to attack the Decepticon. As Atomic Man tried to rescue Kreiger, Soundwave used his fingerbeams to destroy his atomic limbs. Atomic Man made his way over to the Talisman and touched it, repairing his limbs. Tired of fighting the Adventure Team, Soundwave flew out of the tomb, causing a cave in that almost killed Joe and Stalker. The two were saved by Atomic Man, whose Talisman-repaired limbs created a force field to hold up the rubble. The Secret of the Mummy's Tomb

During an assignment to rescue Dr. Emil Burkhart, the Adventure Team was pinned down by IRON Troopers and unable to rescue the doctor, who was strapped to a rocket while his daughter, Adele, was protected by the team. Despite warnings from Joe, Atomic Man made a break to rescue Burkhart, but failed to reach him before the rocket exploded. This failure left Atomic Man disillusioned with the Adventure Team's place in the world as heroes. Power and Glory

By 1994, the Adventure Team had been renamed "Adventure Force", and were on the hunt for Kreiger, whom Mike Power had been working with since the Burkhart incident. Arriving on the scene of a test for Project: Iceman, Adventure Force discovered the aftermath, with Power amongst the wreckage. Stalker confirmed that Power had no heartbeat, leading Joe to sock Kreiger in the jaw. However, Adventure Force now had another problem: the time-displaced Sgt. Savage, who travelled through time when Mike activated the Talisman. When Eagles Scream

After the apparent death of Mike Power, Adventure Force was shut down and eventually replaced with G.I. Joe. Atomic Man profile However, their exploits were still famous, and various members would make public appearances. Homefront, Part 3 of 5 Bullet Man profile Years later, during a strategic meeting, an impostor of Joe Colton would reminisce to Miles Manheim about their Adventure Team days during a meeting and grouse at having had to give it up for a desk job. Secret Raiders 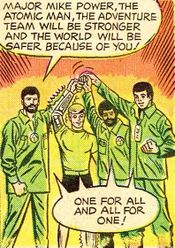