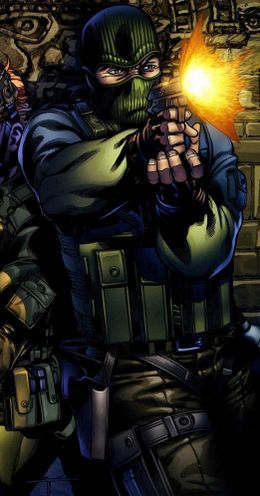 For many members of G.I. Joe, the team is their whole life, but for Wayne R. Sneeden — codename Beachhead or Beach Head — that's more literal than for most. When he was found by G.I. Joe in Guatemala, Beachhead had lost almost all his memories of his previous life, save for his training as an Army Ranger, which he put to use as a member of America's highly trained special mission force.

Sardonic and cynical, but highly skilled and loyal, "Beach" — rarely seen without his trademark balaclava — has served for years as one of the Joes' most prominent members; he often fights alongside his friend Tripwire, and other times has partnered with the weapons engineer Grunt. Whenever there's trouble that needs the skills of a Ranger, Beachhead is there, fighting on the front lines with his fellow Joes.

Following the incident that lost him his memories, Wayne Sneeden's earliest memory was of taking a beating from a group of bullies, but being inspired to fight back after seeing an Army recruitment poster that promised to let him "experience [his] true potential". As an adult, Sneeden became a member of the US Army Rangers, and was deployed with his squad to eastern Guatemala in order to perform recon on newly-risen drug lord Manuel Montenegro. Sneeden and his camp set up shop in a nearby village, where most of the locals were friendly and willing to help thanks to the soldiers' gifts of supplies; however, one boy, Tito, resented their presence and left to alert Montenegro's men. Thanks to a tip-off from Tito's friend Roberto, the Rangers were able to evacuate, but Sneeden realised that Montenegro would have the village destroyed as punishment for hosting the soldiers; disobeying orders to not engage with the enemy, he had the other soldiers take the villagers into hiding while he drew Montenegro's men away. Though Sneeden managed to kill several of them, he was shot repeatedly in the back and fell off a cliff into the Río Dulce river below.

Sneeden survived his wounds and washed up onto a beach near a small hospital, but when he awoke he had lost his memories and had no idea who he was. Panicking and struggling, he tried to escape, forcing the doctors to sedate him; when he woke for the second time, he was greeted by the English-speaking "Dr. Anderson", who showed him his army uniform in an effort to jog his memory. Seeing his "digies" triggered a rush of memories about his Guatemalan mission, though he lied to Anderson that he didn't remember anything; the doctor then revealed that his name was Wayne Sneeden, that he was an Army Ranger, and that he had been declared killed in action. Sneeden was confused, prompting "Anderson" to explain: not actually a doctor, the man's name was Duke, and he had been sent to recruit Sneeden into an elite special forces team: G.I. Joe. Thanks to his amnesia giving him a "clean slate", Sneeden agreed to join up on the condition that he be allowed to take down Montenegro, and was brought into the team with a codename derived from what the nurses at the hospital had called him when he was found: "Cabeza de Playa", meaning "Beach Head". Origins #11

One of his early missions for G.I. Joe was as part of Team Alpha on an insertion/retrieval mission in the Black Sea led by Duke; though minimal resistance was expected, the team experienced much more opposition than they were expecting, and both Grand Slam and Mainframe were heavily injured before they could be extracted. Later, after Mainframe went rogue from the Joes, Beachhead was deployed to help take him in; however, he found nothing at the building's rear while the main team found only a taunting decoy within Mainframe's room. Origins #7

Around three years after Mainframe went AWOL, The Betrayers Part 2 Beachhead took drag during a mission led by Duke to intercept an illegal arms shipment aboard the Benin Pearl. Beach helped to apprehend the ZOGC militia members, but an uncaptured militiaman used a Stinger rocket launcher to destroy the ship; the rest of the militia were killed, though the Joes survived. After Duke asked the last surviving ZOGC member to give them a lead and "go to God in peace", Beachhead was baffled by his response: "Cobra". One Word Some time later, Beachhead went jogging with Duke outside G.I. Joe's headquarters, the Pit, and passed the time by asking him what he missed from before joining G.I. Joe; while Duke missed days where he had nothing to do, all Beachhead had to miss was being able to remember what to miss. As the two entered the Pit, Beach lamented the lack of skill of the opponents the Joes were facing on their missions, something that Duke made fun of him for. G.I. Joe vol. 1 #1

When spider robots invaded the Pit, Beachhead was woken up to deal with them. He and Duke were unable to destroy the robot they encountered until Brainstorm showed up, blinding it with a fire extinguisher and allowing Duke to destroy it with an explosive charge; Beachhead was blown back by the resulting explosion. After a stop-off in Brainstorm's lab, the three Joes made their way to the Pit's server farm to stop the spider robots compromising them in a tank driven by Scarlett, destroying two more "bugs" in the process. In the server farm, the Joes found one of the robots attached to the server and downloading; a precision shot from Beachhead severed the link, but he was unable to stop it from crawling into the Pit's ducts towards the surface, potentially allowing it to transmit the Pit's location if it reached the top. G.I. Joe vol. 1 #3

When Tunnel Rat was deployed to follow the robot through the tunnels, Duke nominated Beachhead and Dusty to follow, but Tunnel Rat deemed them too big for tunnel work, and nominated Scarlett instead. While the other Joes headed for the surface in A.W.E. Strikers, Beach made fun of Duke's lackluster romantic talent towards Scarlett; though Duke insisted that their relationship was over, Beachhead pointed out that she wouldn't have gotten mad at him if it was. When the robot reached the surface despite Tunnel Rat and Scarlett's pursuit, Beachhead manned the gun on the Striker driven by Duke even as it went through the active minefield around the perimeter, which had already destroyed Crankcase's Striker. G.I. Joe vol. 1 #4 Though they closed in on the robot, a mine detonated and flung them from their vehicle, breaking Beachhead's leg and forcing Duke to deal with it himself. G.I. Joe vol. 1 #5

During Scarlett's court-martial for having unauthorised contact with the rogue Joe Snake Eyes, Dial-Tone drew Duke's ire by commenting that Scarlett had brought it on herself by flouting the rules, leading Beachhead to explain the history that Snake Eyes, Scarlett and Duke had together. The Betrayers, Part 1

Beachhead was part of a G.I. Joe team deployed to Castle Destro in Patagonia, and scouted out the building when it became apparent that it was abandoned; he also quipped to Duke that his experience with the highly armed and skilled forces they were up against made him change his mind about wanting a "better class of bad guy". The Betrayers, Part 2 When Cover Girl, Six-Gun and Hat Trick were attacked by a giant version of the spider-robots, Duke and Beachhead came to Cover Girl's rescue after it killed the other two Joes, destroying it with an EMP grenade while she provided suppressing fire. Beach and the other Joes reached the lowest level of the castle and found a ransacked and destroyed laboratory, which Beachhead guessed had been eliminated with thermite. The Betrayers, Part 3 Beachhead and the other Joes later paid their respects to Six-Gun and Hat Trick in the castle's grounds. After Brainstorm and his team of Fobbits arrived with their drone "Fleegman", Beachhead mocked them for their preference for observing from a "safe distance". When Brainstorm realised the true nature of Laird McCullen's breakthrough — a teleportation device — Beachhead followed him back to the lab. The Betrayers, Part 4

On a mission to Colombia to rescue Senator Hopkins, Beachhead ended up cornered by narco-terrorists in an Olmec temple with new G.I. Joe member Tripwire, covering the other Joes' escape with their target. Though he managed to take out several opponents, including one with an RPG launcher, with the help of Tripwire's combat camera, the device was quickly destroyed and the two decided to go deeper into the temple, with the help of Tunnel Rat — a student and explorer of pre-Colombian structures — to guide them from back in the Pit. Though pursued by the terrorists, they were able to escape through the drainage channels beneath the temple, while their pursuers were left trapped in a cave rapidly filling with water. Tripwire and Beachhead met up with the National Army of Colombia outside, and were taken back to Valledupar. G.I. Joe vol. 1 #13

After Cobra agent Blacklight abducted Dr. Gerry Orizama from Robillard College by posing as a member of Youth Against Animal Testing, Beachhead followed Flint to break into the animal rights group's offices, but discovered it was only a shell for Cobra. G.I. Joe vol. 1 #15 When the Joes deployed operatives to multiple sensitive sites in the hope of capturing a Cobra operative in the midst of using the M.A.S.S. device, Beachhead and Duke were sent to Quito, Ecuador, but were called back after Stalker's team captured a Viper in Baranique. M.A.S.S. Destruction, Part 1 Beachhead was one of many Joes sent to interrupt Cobra's execution of a major drug lord in Verde, but didn't get to do anything before Snake Eyes and Agent Helix used M.A.S.S. data cards to have themselves sent back to the Cobra base where it was housed. M.A.S.S. Destruction, Part 3

Following G.I. Joe's reinstatement to combat the threat of the Transformers, Beachhead was part of the team that attacked Jazz and Arcee in Portland, Oregon. Optimus Prime tried to talk the Joes down, but Beachhead interrupted him by firing a bazooka right into the Autobot leader's face. Sadly, the weapon did little damage and only served to irritate Optimus. However, the fight was brought to a premature end when Rom the Space Knight arrived and destroyed several Joes, including Joe Colton, who were secretly Dire Wraith infiltrators. Concorde Hymn

After the battle with Baron Karza, Beachhead grumbled that the Joes were letting Rom go. Grunt reminded him that Rom didn't really kill Joe Colton, but Beach didn't believe the Space Knight's story and insisted that they needed to take down both Rom and the Wraiths, regardless of Scarlett's orders. Reinforcements, Part 1 The two went to a G.I. Joe weapons cache in Northern California to load up on weapons. Reinforcements, Part 2 Using specialized glider packs, they traced the energy readings of Rom and two other Space Knights, Livia and Orphion, to Blind-Eye Cave. Taking them by surprise, the pair knocked out Orphion and fired on Rom and Livia. While they were able to disable Rom's Neutralizer, the Wraithslayer easily defeated the Joes. Reinforcements, Part 3 As the Space Knights flew off, Beachhead realized that they needed new weapons, positing that something from the Cybertronians could work. However, Grunt warned that using Cybertronian tech could start a war, and that instead of thinking bigger, they needed to think smaller. Reinforcements, Part 4