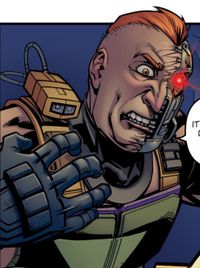 "I'm only gonna say this once. Booyah!"

Bruno Sheppard, codenamed Thunderflame, is the muscle of V.E.N.O.M.. The product of a tough upbringing in New York, Sheppard is a demolitions and engineering expert, giving Miles Mayhem someone who knows how to cause destruction. He wears the "Thunderflame" Mask and is the primary pilot/gunner of the Rhino vehicle.

The son of a petty crook father and "uncommonly tough" mother, Bruno Sheppard was born and raised on the tough streets of Brooklyn, New York, where he earned a reputation as a street fighter. Bruno's father, not wanting his son to follow in his footsteps, enrolled him boarding school, where he discovered his gift for engineering. However, he was kicked out following a fight with a wealthy classmate. Upon hearing of this, his father angrily kicked him out of the house. Now homeless, Bruno competed in underground fight clubs to earn money.

Later, Bruno served as hired muscle for organized crime, getting hired by a group of weapon traffickers who worked for Miles "Mayhem" Manheim. Manheim took a liking to Bruno and sponsored him through an elite overseas mercenary unit. Manheim then recruited him into Project Spectrum. Bruno Sheppard profile

As part of Project Spectrum, Bruno was present for the first test of their transforming vehicles, and was one of the recruits to not be shaken seeing William Evans and Marcia Watkins die. When he commented that he would much rather go in his sleep, Matt Trakker yelled at him in anger, saying that they were their colleagues. Bruno countered that they were recruits, and while it was sad that they died, death was an occupational hazard here.

During a field test in the Canadian Rockies, Sheppard identified that the various materials the train was made of could be mixed to create thermite. One spark and the whole train would blow. When Matt discovered a group of civilians in one of the train cars (which were actually holograms planted by Mayhem), Bruno was forced to stop Trakker so that he wouldn't die as well. Sheppard was initially angry at Manheim's manipulation, The Origin of V.E.N.O.M. Part 2 but he was one of the few not demoralized by the test, and as such was added to Manheim's list of potentials for his black ops team. M.A.S.K.: Revolution

Sheppard was part of the M.A.S.K. team at Governor's Island and took part in a mission to neutralize the Autobots Kup and Aileron in Greece. He piloted the Rhino vehicle with Julio Lopez, manning the truck's weapons and firing on Kup. The Divine Source of Liberty

He continued his role as Rhino's gunner during M.A.S.K.'s assault on Autobot City. The New Colossus

During the fight, Sheppard, Vanessa Warfield, and Sly Rax disappeared, and were presumed dead in the Ore-13 explosion. Valley Forge

The three of them, along with Miles Mayhem, later turned up alive as part of Mayhem's V.E.N.O.M. team. M.A.S.K. #1 During V.E.N.O.M.'s attack on the remaining M.A.S.K. agents at Harrison's Cave in Barbados, Bruno removed his Thunderflame Mask to reveal half of his face replaced with cybernetic enhancements. When Matt asked what happened, Bruno angrily blamed the M.A.S.K. leader for his current state. As the team escaped from the cave, Bruno pursued, blasting them with fire from his Mask. Matt briefly knocked him out with his Thunderhawk's door-wings, but Bruno's cybernetics kept him from injury. He proceeded to attack Gloria Baker's Shark in his Rhino. As Gloria escaped, Bruno vowed revenge on M.A.S.K. for what they did to him. M.A.S.K. #2