We wish we had a better picture too.

Butin is a Space Knight of the Solstar Order. She might wield daggers.

Butin was a new recruit to the Order who became a Cadet at the same time as Rom, Livia, and Fy-Laa. On her first field mission, she was teamed with Prim to investigate a volcano on Shrinn Island. Cold Fire Butin was later made a Space Knight. Knights of the Solstar Order profile

A female humanoid Knight was one of four Space Knights assigned to quarantine Cybertron after the Solstar Order had detected unusual Dire Wraith signatures coming from the metallic planet and barred the Carcerians from teleporting in reinforcements. First Strike #2

This same Knight later assisted a group of Space Knights in defending Elonia from being consumed by the monstrous planet Unicron, wielding a pair of daggers. The dagger-wielder and several Knights attempted to attack Unicron through his maw, only to be destroyed by an immense eruption of energy. Our Darkest 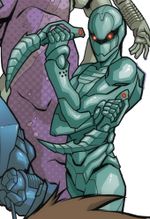 This would be a lot better... if we actually knew it was her.

The identity of the dagger-wielding Space Knight has never actually been confirmed to be Butin on-panel. The key aspects that suggest she is Butin are her humanoid, female body shape, which correlates to Butin as the only other known female Elonian Space Knight, and the fact that the dagger-wielding Knight first appeared in a group shot in the same story that introduced Butin.

When asked if the dagger-wielding Knight was Butin, various creators who worked on the ROM titles have given different accounts:

Due to the conflicting nature of these accounts, we here at the IDW Hasbro Wiki have opted to include information for the dagger-wielding Knight on Butin's page for simplicity, though the two may be distinct individuals.