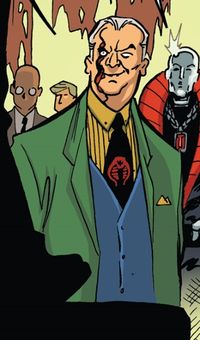 As Chief Pollution Officer, Cesspool's duty is to ruin the environment in the name of Cobra!

Cesspool (or someone who looked a lot like him) was one of the various looters and polluters faced by Team Extreme and Sgt. Savage in the 90s. When Eagles Scream

Cesspool was part of the Baroness' revived Cobra, overseeing their efforts to melt the polar ice caps through carbon emissions produced by the terrorist organization's shell corporations. M.A.S.K.: First Strike

Cesspool's polluting eventually gave birth to the Army Ants. Shrinking himself down to the miniature size of his mutations and heading to Mexico City with a nuclear bomb in tow, Cesspool held the city for ransom in the name of Cobra. As G.I. Joe arrived to shut his plot down, Cesspool threatened to detonate his bomb but was taken out by Lady Jaye with a laser javelin to the back. Now in custody, Cesspool offered his captors important information such as the location of Cobra's secret Arctic base just so long as they promised to protect him from the new Cobra Commander. Scarlett's Strike Force #1