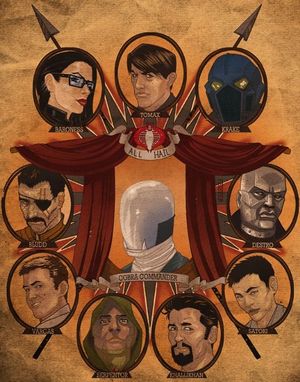 Crashing through the sky comes a fearful cry!

An ancient, ruthless terrorist organization, Cobra are not just determined to rule the world—they practically already do, having been manipulating events on the world stage from the shadows for a thousand years. While they traditionally have preferred to control through business, politics and conspiracy, their advanced military technology and expansive armies form a deadly threat to even the most highly trained special mission force.

Traditionally, Cobra is led by a Commander and overseen by the Cobra Council; below them is Cobra High Command, who lead the lower-level workings of the organization. Individual members of High Command are afforded a significant amount of autonomy to pursue any agenda that furthers Cobra's goals; they'd better get results, though, as failure in Cobra can have deadly consequences.

Cobra eventually came to renounce violence and become a group of private military contractors, and ended up collapsing thanks to the efforts of G.I. Joe. But you can't keep a good terrorist conspiracy down...

According to Mercy Gale in 2017, the reign of Cobra lasted a thousand years placing the group's origin in the 11th century. The final Cobra Commander, Tomax Paoli however referred to half the reign as nothing more than fiction. The Secret of the Mummy's Tomb

In the year 1320 Cobra member Dante Alighieri was killed at the orders of Cobra Commander for writing the Divine Comedy, an allegory for Cobra and its dealings. The poem and its vision of a utopian future haunted the Commander however and he reorganized Cobra towards new sciences and technologies. Inferno

In the 18th century, the ruling Commander refocused Cobra into controlling the seas during the Golden Age of Piracy. A Coward's Heart In the 19th century, they influenced the Edo period of Japan. Shadows and Light

In the 1970s, the most successful Cobra Commander would be appointed to the title. So efficient was he that he was elected an additional five times despite Commanders only being allowed to reign for seven years. As such his rule extended into the early 2000s, The Lost Boy and into their war with the covert U.S. military force G.I. Joe in 2006. G.I. Joe vol. 1 Crisis Intervention

Cobra Commander turned his attention towards the M.A.S.S. Device, The Origin of Zartan, Part 2 but it failed to function despite multiple attempts. G.I. Joe vol. 1 #16 A receiving station, Section Sabine, was built on the moon. M.A.S.S. Destruction Part 5 Enter The Shadow

Cobra faced threats from within as well as without as power struggles abounded within the group. It culminated with Cobra Commander eventually being shot point blank in the head by Chuckles. Rattler

In the power vacuum that arose, the Cobra Council organized a contest to see how would become the new Commander. The winner would be the one who caused the most chaos for G.I. Joe. G.I. Joe vol. 2 #1 The winner was Krake, G.I. Joe vol. 2 #8 who sought to end Cobra's hiding in the shadows and legitimize it as an international power. He sought to do so via conquering the country of Nanzhao in the Golden Triangle. Cobra Command, Part 1

Following this however, Krake's rule collapsed on itself as both the Baroness, Target: Snake Eyes, Part 4 and Destro were exiled from Cobra. Threat Matrix Conclusion

Five years later, Tomax Paoli rose to command Cobra and reformed it into a legitimate private security organization. The group was hired by Schleteva to keep the peace in the third world nation. This legitimization nearly caused G.I. Joe's shutdown as the United States Senate felt no need for them as they viewed Cobra as no threat. The Joes however were sent to the Schletevan border to kill some separatist terrorists, G.I. Joe vol. 4 #1 which allowed them to expose Cobra's true intentions and caused the organization to collapse in on itself bringing their reign to an end, G.I. Joe vol. 4 #8 in 2014. Crisis Intervention

he recruited the remnants of Arashikage clan in the form of Storm Shadow and her Red Shadows. Redcliffe Club

as well as Destro to not only make use of his technological skill but the M.A.S.S. Device. A Game of Chess

and made use of Section Sabine. Enter the Shadow

Despite the larger organization's collapse, pockets of stragglers remained such as the Dreadnoks in Inner Mongolia, G.I. Joe vol. 5 #1

or Major Bludd joining up with the Oktober Guard. Crisis Intervention

Cobra was eventually properly revived under the rule of the Baroness, G.I. Joe vol. 5 #9