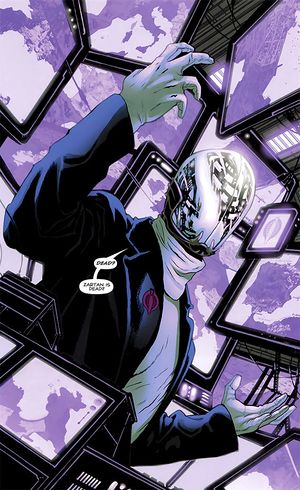 Commanding the heck out of that turtleneck.

"Commander" is the title given to the supreme leader of Cobra. Elected once every seven years in an occult ceremony from a pool of candidates chosen by the Cobra Council, the Commander dons a mask to hide their face from the world and directs all Cobra's operations from the shadows. There have been many commanders in Cobra's centuries-long history, but the mystery man who led the organization for the last quarter of the twentieth century was one of the most successful. 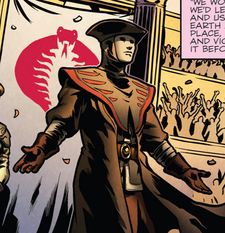 The earliest documented holder of the title of "Cobra Commander" was an individual living in the Late Middle Ages. In the early 1300s, he ordered the death of Cobra member Dante Alighieri when he realized the poem the man was working on, the Divine Comedy, was an allegory for Cobra and its dealings. Haunted by Alighieri's vision of a paradisiacal future that he believed Cobra could bring to the world, the Commander was inspired to spread Cobra's pursuits into new, emerging areas of science and technology, and to newly-discovered countries. After twelve years, when Alighieri finished the poem, the Commander had him poisoned, sadly realizing that the beautiful future he had envisioned was impossible for Cobra to attain. Inferno

In the early 18th century, Cobra controlled the waves during the Golden Age of Piracy, and its Commander played on the rage and vanity of pirate Captain Shelley to force him into a suicide mission. A Coward's Heart In mid-19th century, toward the end of the Edo Period in Japan, a female Commander founded what would become the Yakuza when she taught the native criminals how to organize. Shadows and Light In 1915, during World War I, the current Commander—an eerie, detached man who did not believe in accepting something for nothing because it incurred debt—was interred at the Ruhleben prisoner of war camp, where he befriended fellow prisoner Thom Laurel. Laurel sacrificed himself to allow the Commander to escape, and the Commander honored his request to take a message to his son in England. To fulfil Thom's wish that his son would not go down the same path he did, however, the Commander simply killed the young man. The Debt

The Commander of the 1960s was a jovial man who liked to spend his time gardening on Cobra Island. Cobra operative Charles Pyke was uninspired upon meeting him, and plotted to betray Cobra to its enemies... whereupon the Commander calmly, brutally, killed him with his bare hands. The Gardener 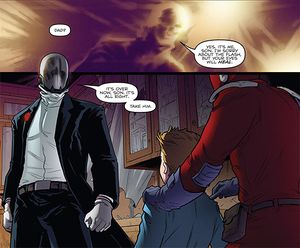 Elected at some point in the 1970s, the man who was Commander of Cobra for the first stages of its war with G.I. Joe was so successful in the role that he was re-elected five times, leading the organization through to the end of the 2000s. He lived a civilian life in Vienna, where he was a "man of prominence" outside of Cobra, with a wife who was aware of his criminal enterprises, and a son, Billy, who was wholly unaware of his father's double-life and believed he worked for the government. That all came to an end on the day that a team of Cobra Vipers—acting under orders of parties unknown—burst into his home while his wife and Billy were alone, and gunned his wife down. Before they could do the same to Billy, the Commander arrived with a squad of Crimson Guardsmen and executed the Vipers. Vowing that the tendrils of Cobra would never touch his child again, the Commander had Billy sent away to boarding schools and foster homes. The Lost Boy

Billy never saw his father again, but the Commander kept tabs on his son. When Billy broke his leg in a skiing accident, the Commander saw an opportunity to further protect the boy against action from other members of Cobra, and had Billy's doctors repair his femur with what looked like a pin, but was in fact a data drive containing detailed information on all of Cobra's illicit operations and dealings, a piece of hidden insurance that would mean nobody in Cobra would move against him. The Silent Warrior 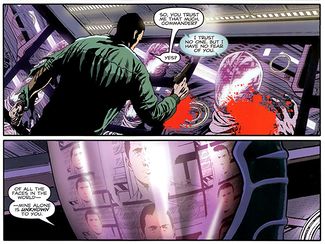 The death of valuable Cobra assassin Emil Zartan during an early deployment of Cobra munitioner James McCullen Destro's M.A.S.S. teleportation device left Cobra Commander furious. He ordered Doctor Mindbender relocated from his laboratory to the M.A.S.S. construction site at Section Zero, and charged the scientist with covertly obtaining the map of Zartan's genome the M.A.S.S. device had recorded while teleporting him. Using the data, the Commander restored Zartan to life of a sort in the form of a shape-shifting clone, with a view to creating an army. The Origin of Zartan, Part 2 The Zartan clone escaped the laboratory, but soon returned to make contact with Cobra Commander, agreeing to work for him in return for autonomy and permission to kill everyone who knew his true nature. The Commander agreed, noting that he had no reason to personally fear Zartan and his powers, because his permanently-hidden face meant Zartan would never be able to impersonate him. The Origin of Zartan, Part 3

Repeated failure by the Section Zero team to complete the M.A.S.S. device on schedule, and continued refusal by team leader Baroness to obey orders to abandon the project, forced the Commander to check in on the facility personally—in a manner of speaking. Observing remotely through a small, flying robotic drone, he surveyed the complex, received updates on the team's progress, and watched as the device was successfully deployed. Satisfied that M.A.S.S. now functioned, the Commander ordered Destro shipped off to Cobra's Section Ten gulag, and ordered the Baroness to relocate to his side. G.I. Joe vol. 1 #16 Over the course of the next three months, however, Destro seized control of the gulag and used his new position of power to bargain with the Commander for a position in Cobra High Command. G.I. Joe vol. 1 #19 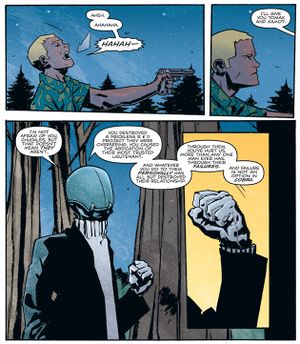 When the G.I. Joe operative known as Chuckles, who had been waging a private, one-man war against Cobra for past manipulations and tortures they had subjected him to, was captured by Tomax and Xamot Paoli, the Commander personally chose to greet the Joe when he awoke in captivity. Cold-Blooded Impressed by Chuckles's tenacity and survival skills, the Commander thought he could be turned to Cobra's side, and had him relocated to Section Twenty, located on an island north of Japan. There, Chuckles was held in comfort, well-fed, was often visited by the Commander, who repeatedly attempted to talk him into joining Cobra. Sidewinder

Cobra Commander was enraged to learn of G.I. Joe's discovery of a Cobra data well on the South Pacific island of Manatua, and their subsequent theft of Cobra submarine the Dreadnaught, immediately ordering that the ship be recaptured. G.I. Joe vol. 1 #22 Tensions continued to rise as the Baroness learned of Destro's appointment to High Command, and the Joes captured a recall tag that would allow them to piggy-back on the M.A.S.S. Device's signal. Mass Destruction, Part 1 Using this, Joe operatives Snake Eyes and Agent Helix infiltrated Section Zero, forcing Cobra Commander to make a drastic move: refusing to consult with the Council, he unilaterally decided to trigger Section Zero's failsafe self-destruct to prevent the secrets of M.A.S.S. from falling into enemy hands. Mass Destruction, Part 4

With Section Zero's destruction, Cobra Commander returned to Section Twenty with the Baroness in tow. Mass Destruction, Part 5 Presently, the implacable Chuckles staged an escape attempt, but as he fled into the woods around the facility, the Commander appeared before him and made him one final offer: if Chuckles joined Cobra, the Commander would give him Tomax and Xamot, the architects of all the agony Cobra had visited upon Chuckles, and who the Commander was happy to see punished for their failures. Intrigued, Chuckles finally accepted. Sidewinder 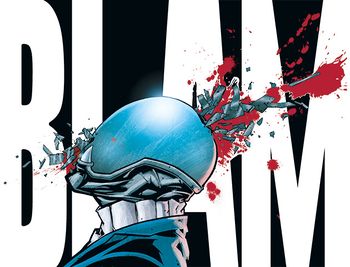 The Commander kept Chuckles close and confided much in him about Cobra's operations and projects, but was not above conducting one final test to confirm if his change of heart was genuine; he requested that Chuckles detonate explosives on a dam on a neighboring island that would devastate the fishing village there, which Chuckles did without hesitation. Constrictor Soon after, Xamot—having grown progressively more unstable after an altercation with Chuckles the previous year—staged an attempted coup, intending to kill the Commander and pin the blame on Chuckles. The Commander had foreseen Xamot's actions, however, and had kept Chuckles by his side in preparation for that moment. Cobra Commander ordered Chuckles to kill the enemy that stood before him... whereupon Chuckles, having also spent all his time waiting for this moment, shot the Commander through the head at point blank range. Rattler Tomax and the Baroness were just barely able to evacuate with the Commander's body, moments before Chuckles detonated a Cobra nuclear missile below the island, obliterating, it, Xamot, and himself. King Cobra

As the Commander had been a significant figure even in his civilian identity, it was necessary for Cobra to stage a "substitute" demise, loading his body into a plane and crashing it to disguise the true nature of his death. Given the unprecedented circumstances of his assassination, the Cobra Council elected to hold a contest to choose the next Commander, charging seven chosen candidates with causing as much death as misery for G.I. Joe as possible, with the winner being the one would would hurt them the most. G.I. Joe vol. 2 #1 The winner was Krake, who ascended to the role of Cobra Commander and set about bringing the organization out of the shadows, transforming it into a legitimate world power. G.I. Joe vol. 2 #8

Hoping to counteract Cobra's bolder operations, G.I. Joe located the former Commander's now-grown son Billy and brought him into custody, but he knew nothing of his father's criminal life and could provide them virtually no workable intel. Billy became a target in his own right, however, several years later, when Destro employed Snake Eyes to obtain the "pin" from Billy's leg containing the old Commander's data cache. The Silent Warrior

Cobra Commander's death would eventually be... loosely adapted for the silver screen by Thundercracker in the biopic he wrote about Chuckles. Starscream: The Movie

As Rom, Snake Eyes, and the Micronauts returned from Microspace at the doorstep of Cobra headquarters, Aw Yeah Revolution #2

he ordered his forces and their new Weapon Prime to attack the heroes. Even though Rom eventually flung Prime into space, Cobra Commander remained confident that they could still win the day, his confidence bolstered by the fact that his ally Baron Karza still possessed the Orbsah Gem and used it's energy to grow gigantic. While Karza lost it soon after, the powers of the gem still remained on Cobra's side when Destro took possession of it. Aw Yeah Revolution #3 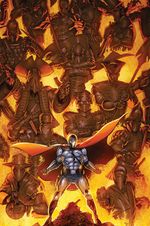 "Stay back! I have powers... political powers!"