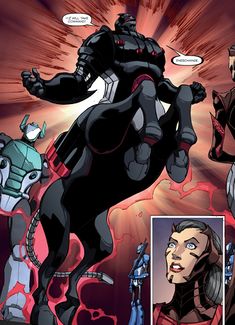 This is both amazing and completely ridiculous.

The ability to Enerchange is a mysterious ability possessed by the residents of Microspace, allowing them to merge with and connect to other Microspace technology and beings on a molecular level. This primarily manifests as shapeshifting and fusion, summoning weaponry and equipment, and taking control of Microspace technology. Overuse of its power, however, can lead to mutation and mental breakdown. It is also referred to as Micromeld.

The origins of this power are unknown but it appears to be available to all the denizens of Microspace. Enerchanging bonded the objects on a molecular level and though it was normally done using weapons and tools, it was possible to initiate a forced enerchange with another sentient being. To properly master enerchange often required years of training. Mechanical lifeforms did not require practice however and could simply download command codes to learn the process. What made Baron Karza such a formidable foe was that he had mastered the dark art of forced enerchanges on unwilling participants. Microspace Knight

The laws of the Time Travelers decreed that no Time Traveler would enerchange with a Time Chamber. Micronauts #9

During the liberation of the Pharoid temples, Baron Karza was warned by a dying soldier that the Time Travelers had been driven mad by enerchanging with time itself. Micronauts #4 While stuck within the Entropy Cloud, Micronauts: Revolution Karza discovered the evidence that supported this. Wrath of Karza #1

When leading his forces into battle against Baron Daegon's army, Karza Enerchanged into a centauroid battle form, Micronauts #5 and Daegon used a similar form to fight him. Micronauts #6

Caleb Awan claimed that Axiom was created by combining Micromeld technology and Ore-13 with Wraith magic. The New Colossus

Upon arriving on Earth, Karza Enerchanged with the Dire Wraith army, fusing them into a titanic, organic combiner. The New Colossus

Subsequently, Rom's connection to Metrotitan's spacebridge allowed the Micronauts to Enerchange with it, using Rom's armor as a conduit; with the help of Soundwave, Mainframe, and Matt Trakker, they managed to shut down the spacebridge and prevent the detonation of the Ore-13, saving Earth. Valley Forge

Subsequently, while investigating the Talisman, Larissa realized that, even though it did not originate from Microspace, she could Enerchange with it and pilot it as a ship. Enter The Shadow

In preparation for his invasion of Earth, Karza enerchanged with Micronus Prime allowing him control over the Prime's spacebridge and power but at the cost of the Prime's persona subtly overwriting Karza's own each time they fused. Wrath of Karza #1 After attaining Time Traveler energy, Shazraella forcibly separated Micronus from Karza. Wrath of Karza #5

so that she could use her enerchanging powers to merge the Talisman with Cybertron's core to poison all the energon on the planet. To more effectively move about on Cybertron, Shazraella enerchanged with Antagony. First Strike #2

After being captured, Shazraella was forced to release Antagony First Strike #6

though the procedure would ultimately prove fatal to her Cybertronian host. The Dead Come Home, Part 1

As part of their alliance, the Absence and D'rge altered the enerchanging abilities of Baron Karza so that he could steal Rom's size and strength while sending the Knight into Microspace. Small World After retrieving him, Larissa explained enerchanging to Rom and began training him to use the craft. Microspace Knight Learning of the practice gave Rom hope that he might one day use it to rid himself of his Space Knight armor. Later confronted by Axiom, he used it to steal the hybrid's size. Asymmetric Warfare He later attempted to steal back his power from Karza only for the Baron to assume control of the process and merge the two. Despite this, Rom retained enough control to force the energies of the Entropy Cloud at the Presence. Following her defeat, Karza willingly returned all the power he had stolen from Rom. Gods and Monsters

In a possible future, the Entropy Cloud had consumed all of Microspace save the Udunax System, home of the Kronus. The last Time Traveler fled there and when the Cloud encroached on the system, he acted in defiance of his people's laws and enerchanged with his Time Chamber using his newfound power to save a portion of the native race. The merger eventually resulted in the creation of the Sentient Time Chamber. Micronauts #9 Micronauts #11