Can Action Man prove he isn't as incompetent as his team thinks?

Four years ago in London, after being snubbed by a group of peers, Ian Noble comes across a man leaving a mysterious locked door. Pickpocketing his security card, Ian manages to use his skills to unlock the door, leading him to the surprise of his life...

Today, in the Hauteville House at Guernsey, Ian shoots down the extremists supposedly seeking Guernsey independence, taking care not to harm the hostages. Agents Gale and Salmons barge in just in time to witness the aftermath of the fight. Salmons isn't very happy with how Ian handled things, but Action Man brushes off his concerns. Director Bestley at headquarters isn't any more forgiving, chewing Ian out for not following her orders to stay out of the hostage situation and her headaches with the Guernsey authorities. Ian tries to defend himself by pointing out the "X" on one of their belt buckles indicated that Doctor X was behind the situation, but Bestley brushes it off as Ian leaping to conclusions and punishes Ian by confining him to his quarters. Outside her office, Salmons gives Ian a piece of his mind—physically—and the confrontation is broken up by Chan, who sends Salmons off. Ian gives Chan the mobile phone he lifted off the extremists' leader and asks the quartermaster to see if there's any leads within.

In the canteen, Gale comforts a dejected Ian, assuring him that what he did was amazing, and that Bestley wasn't really going to leave the hostages behind; Gale and Salmons were assigned to rescue them in the first place. When Ian brings up Doctor X's potential involvement, Gale counters that sometimes a mark is just a mark. Ian soon meets with Chan, who tells Action Man that the phone was used to make calls to Bath, but Salmons catches Ian out of quarters and forcibly escorts him back. However, what he doesn't notice is that Ian swiped his security card, allowing him to break out and investigate the Bath lead.

In Bath, Ian spots the ominously clothed Colditz speaking with a mysterious ninja, the former complaining about how the traitor within the Action Man Programme didn't help with the Guernsey situation. Nevertheless, the ninja invites the former to the Chateau. After the ninja disappears, Ian leaps into action and manages to take down Colditz after a struggle. Salmons, having tracked down his wayward teammate, shows up and compliments Ian on an adequate enough job. Turns out that the Action Man Programme has been tracking down the Chateau for a while, and Ian's been nominated to go undercover. 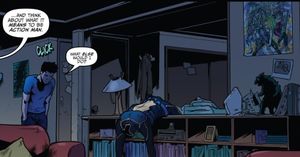