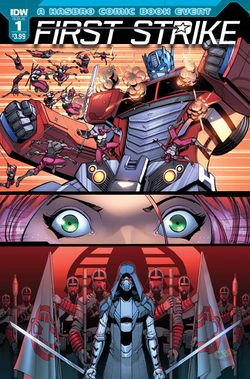 Pay no attention to the Cobra flags and logo.

First Strike is a 2017 Hasbro Universe crossover event by IDW Publishing, focusing on the Transformers, G.I. Joe, and M.A.S.K. teaming up to combat the Iron Ring's assault on Cybertron.

TFWiki.net covers all issues of First Strike that feature Transformers in a significant capacity. For information on those issues, as well as First Strike as a whole, visit TFWiki's First Strike page.

The seeds of First Strike were planted in 2016's pre-Revolution story arcs in The Transformers and Action Man. The former featured Optimus Prime annexing Earth into the Council of Worlds as a means to defend humankind from further extraterrestrial threats, and this continued in the successor series Optimus Prime. The latter revealed human supervillian Doctor X to be working with fellow supervillains Storm Shadow (and her Red Shadows) and Baron Ironblood in an unspecified plot of world domination. Subsequently, Revolutionaries continued this plot thread as Kup, Action Man, Mayday, and Garrison Blackrock hopscotched across the globe to uncover the secret of the mysterious Talisman, an artifact also desired by the villain coalition.

A year after Optimus Prime's decision to annex Earth into the Cybertronian Council of Worlds, a unified humanity stands ready to join the interplanetary coalition as equals to the Transformers. However, this event is thrown into chaos by the machinations of Baron Ironblood, who leads a crusade to destroy all Transformers. Now it's up to Scarlett, Optimus Prime, and Soundwave to save both worlds and ensure Earth's status on the Council.

Mairghread Scott, writer of Windblade and Till All Are One, and David Rodriguez, co-writer of the 2017 M.A.S.K. annual jointly write First Strike, while Max Dunbar, artist of Micronauts, handles artistic duties.[1]