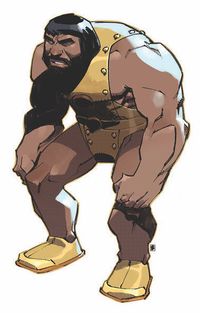 The Intruders are strong men from another world! Though little is known about them, these cavemen-like aliens possess immense strength and speak in their own language. They appear to have been enemies of the Adventure Team during the 1980s.

When reminiscing with Miles Mayhem about their Adventure Team days, "Joe Colton" recalled that the Team battled "Intruders." Secret Raiders

While its unknown if he was specifically referring the strong men from another world, an Intruder action figure was produced as part of the Adventure Team toys. Duke owned one. Homefront, Part 3 of 5

While on a mission to find the new Cobra Headquarters, a G.I. Joe squad encountered an Intruder, who rescued them from an Ankylosaurus. Scarlett's Strike Force #2