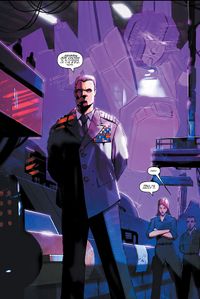 "In the event of say, a full scale alien invasion, how prepared do you think this planet's defences would be? Tell me."

While this creature may look like Joe Colton, US Army General and leader of G.I. Joe, it is actually one of the dreaded Dire Wraiths! Acting on the part of its masters, "Colton" has taken command of the Earth Defense Command, organizing them against Rom the Space Knight and the Transformers.

Luring him onto a Tomahawk by impersonating someone he respected, First Strike #0

a group of Dire Wraiths attacked Joe Colton intending to transform him into one of them. As one of the Wraiths attempted to infect him, Colton was forced to cut off his hand and jump out of the vehicle into the woods below. Fortunately for the Wraiths, the hand proved to be enough to allow them to absorb Colton's DNA and assume his form. Ghost in the Machine

The President of the United States unwittingly put the Wraith Colton in charge of the Earth Defense Command, after Optimus Prime raised a giant Transformer from out of Monument Valley. Among his first actions were recalling operative Spike Witwicky to the E.D.C. fleet, and dispatching former Joes Scarlett and Roadblock to transfer captured Cybertronian sleeper agent Garrison Blackrock to a safe house. White Light

Colton traveled with Scarlett and Roadblock to Vandenburg Air Force Base in California to meet with EDC agents in response to reports of a silver alien murdering people. Earthfall: Part One However, they soon departed. While over Arizona, Colton cited the greater threat in Utah, leaving the lone killer alien problem to the local authorities. Earthfall: Part Two

Wraith Colton and his colleagues Riggins and Kohl also approached Caleb Awan (also a Wraith) and Aaron Grundy of the newly-bought DeepWave Technologies to upgrade their cybernetic defense armor, using Ore-13 to turn the suited Aaron into the monstrous slave of the Wraiths known as Axiom. Field Test

Colton later met up with Scarlett and General Miles Manheim to discuss the history of Transformer activity on Earth. During the meeting, Colton was very vocal about his dislike of the Transformers, and revealed to Manheim that the worldwide deposits of Ore-13 were destabilizing, and on the verge of destructive nuclear fission. Believing this to be Optimus Prime’s doing, Colton tasked Manheim with using the technology of a captive and tortured Blitzwing to disrupt Prime’s plans. Secret Raiders 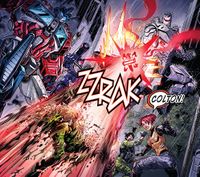 So powerful was Rom's blast that one "Z" just wouldn't cut it.

Later in Portland, Oregon, Colton led a G.I. Joe unit in an attack against the Transformers. The battle was then interrupted by the appearance of Rom, Concorde Hymn

who had learned from battling Axiom that Colton was involved with the Wraiths' Ore-13 activities. Field Test Thinking Rom to be another Cybertronian, the Joes fired on him. Colton ordered the Joes to ignore the Transformers and focus their attacks on Rom, only to be destroyed in an instant by Rom's Neutralizer. Scarlett was devastated and, looking at his remains, swore vengeance on the Transformers. Concorde Hymn

The corpse of "Colton" was analyzed by Doc, who found non-human DNA, alerting the Joes to the Wraith infiltration. O Ship of State

The exposure of Colton's true fate would hang over the Joes for some time. While beating the Wild Bill Wraith to death, Rock 'n Roll angrily demanded to know what they had done to Colton. D.T.A.

Even after fighting alongside Rom in Monument Valley, Beach Head remained in denial that Rom had not killed the true Colton, Reinforcements, Part 1 and upon meeting Rom again in Schleteva, Mayday by reflex referred to Rom as the murderer of Colton. Crisis Intervention