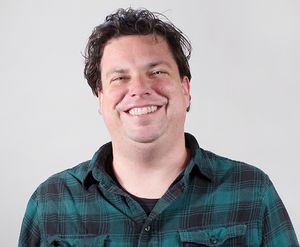 Before working for IDW, Barber published his own comics and also worked for Marvel Comics, editing Wolverine comics, gaining familiarity with wrestling an erratic continuity. He then wrote all of IDW's Dark of the Moon comics, as well as three prequels to the movies to reconcile Chris Ryall, Simon Furman and Chris Mowry's stories, Alan Dean Foster's novels, the films themselves and character bios.

Barber then became IDW's senior editor writer, overseeing all the Hasbro books, as well as writing the ongoing comic title The Transformers: Robots in Disguise. In the process he waged a ceaseless war against continuity gaffs and errors, turning the most forgettable goofs into key plot points. He was also the co-writer of Transformers vs. G.I. Joe.

Barber was succeeded as senior editor by Denton J. Tipton, and as Hasbro Books Group Editor by Sarah Gaydos.[1] He continued to write for IDW, writing Optimus Prime. In May 2018, Barber rejoined IDW as Editor-In-Chief, taking over for Chris Ryall.