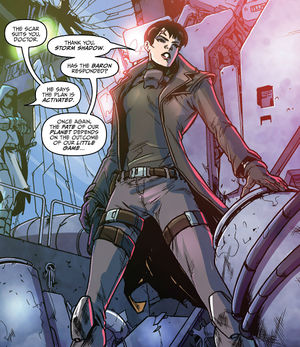 Knock knock, open up the door, it's real.

Once, Mercy Gale was one of the most loyal agents of the Action Man Programme, running intelligence for the elite division of the Secret Intelligence Service and helping to organise missions for the incumbent Action Man. But the constant tug-of-war between terrorist organisations and the forces that fight them weighed heavily on Mercy, and when she saw her chance, she took on the mantle of the supervillain Doctor X to secretly manipulate Europe into a brighter future.

While Doctor X lacks the raw scientific genius of her predecessor, she makes up for it with her skillful manipulation of her terrorist empire and ability to play the "heroes" against one another for her own benefit. For a time, X was able to control both the Action Man Programme and her villainous servants to accomplish her goals, but even after the new Action Man Ian Noble revealed her deception to the world, the bad doctor has little trouble getting what she wants... for the good of the world, of course. 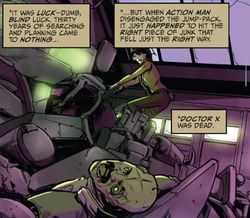 After graduating from King's College in the University of Cambridge, Mercy Gale was recruited by MI6 and was a loyal agent of the United Kingdom. Within 5 years of her recruitment, before she turned thirty, she was headhunted for the Action Man Programme by then-director Patrick Cain, becoming head of intelligence within 10 months. In her new position, she worked alongside quartermaster Ernst Sinclair in preparing Action Man Mike Brogan for missions against international terrorist threats, most frequently including Doctor X. Doctor X profile While tracking down a chemical compound, she concluded Doctor X had it and sent Brogan to take care of it. He crashed through the roof and fought off the 1500 college students mutated by Doctor X using the chemical. When all was said and done, Gale realised how there seemed to be no end to the constant react-and-counter modus operandi of organisations like the Action Man Programme. While investigating the site, she happened upon the dead body of Doctor X himself, buried under rubble that Brogan caused. Being the only one who knew of the doctor's death, Gale took the opportunity—she would assume his position.

As Doctor X and as Agent Gale, she was able to manipulate both sides to accomplish her goals. One which included protecting London from the 2008 Decepticon invasion of Earth. Another was acquiring an interplanetary propulsion system, but Ian Noble's interference as a spy caused one of her agents to overload the antimatter generator Mr Love and Justice and Mike Brogan was forced to sacrifice his life to save the world. To the Victors the Spoils Ian Noble would subsequently become the next Action Man, which Gale didn't mind; Brogan would have not fit into the world she envisioned, while Noble could be tempted. Mr Love and Justice

In 2016 in her day job, Gale, with Agent Salmons, assisted Ian in cleaning up a derailed train and comforted Action Man on his guilt over the death of his predecessor. Absolute Beginners Gale conceived a new plan: to acquire an O.S. codex and the IP addresses of American agents so that she could decode all secret American communications and access their information on alien technology. Mr Love and Justice The O.S. codex was in Hauteville House in Guernsey Absolute Beginners so, via the mercenary Colditz, England, Half English Out of the Way she hired a group to act as extremist separatists to force Director Bestley to retrieve the O.S. codex. Ian succeeded at doing so. Absolute Beginners In the meantime, Gale was assigned to rescue the hostages the separatists had kept, but Ian took care of that aspect as well. England, Half English After getting the codex, she had the Professor at the Chateau scrape IP addresses from American agents. Mr Love and Justice Gale meant for Ian disguised as Colditz to walk in and acquire the data and leave without issue, Mr Love and Justice but the doorman having had a fling with Colditz blew Ian's cover, and Gale was forced to improvise. After apparently killing Salmons, she revealed to Ian that she was Doctor X. Out of the Way

Taking Ian to a secluded spot in the Bavarian Alps, she faked her death while giving a monologue to Ian about her motivations and plans. The surprise survival and appearance of Salmons gave Ian the opportunity to break free of his restraints and hitch a ride with Gale to her airship rendezvous with her associate, Storm Shadow. The arrival of Bestley and Chan put the kibosh on this meeting, and the airship was destroyed.

Despite the AMP's belief, Doctor X and Storm Shadow survived the explosion and proceeded on a plan with former AMP antagonist Baron Ironblood to ensure the survival of their planet. Mr Love and Justice 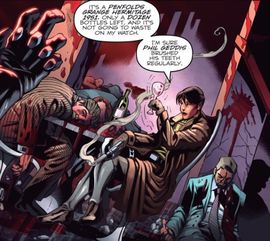 Doctor X was among the villains contacted by Baron Karza with an offer to begin working for him after he completed his conquest of Earth. Wrath of Karza #3

After somehow running afoul of the criminal Geddis brothers, Gale met with them at their Redcliffe Club in London, where she foiled their attempts at killing her by having Storm Shadow and her Red Shadows massacre them and their henchmen instead. While partaking in the Geddis' wine, Gale and Ironblood met in person for the first time and the villain revealed to her that he was in fact the presumed dead American war hero "G.I. Joe" Colton. Though she was rather unimpressed by Colton's whole "pretending to be a supervillain" shtick, she still listened to him as he explained that he'd come to her to offer a place on his team of villains willing to end the Cybertronian problem once and for all. However, she remained unconvinced and sicced the Red Shadows on Colton, but he managed to disable Storm Shadow with a shock from his prosthetic hand. Offering to enhance the ninjas even more than Mercy already had through the power of the Talisman, Colton earned Storm Shadow's interest and Gale agreed to work with Colton even though she wanted no part of the actual mission to destroy Cybertron. Redcliffe Club

These Talisman enhanced Red Shadows were sent on a mission in Japan where they ran afoul of the international G.I. Joe team, who were aware that Doctor X was behind their upgrade. G.I. Joe vol. 5 #1 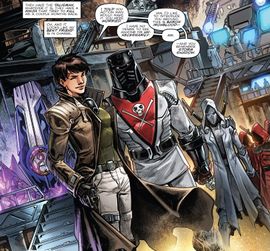 After taking over the abandoned Cobra moonbase Section Sabine, Doctor X and Ironblood had the Talisman moved there for study by the Oktober Guard. However, the Guard inadvertently ended up dragging Action Man there along with them when they teleported away. Despite Ironblood believing they'd be better off killing him, Gale refused to, believing he could still be swayed to their side. Meeting with Ian, she introduced him to Ironblood before having Storm Shadow hold him at swordpoint, warning him that she didn't want to kill him but also couldn't just let him go. Even after Ian began fighting back, Gale insisted that her allies not harm him. When Action Man's allies came to the base looking for him and the Talisman, Doctor X and the others were forced to retreat, leaving both Ian and the Talisman behind. Enter The Shadow

Doctor X and Baron Ironblood visited Tomax Paoli to convince him to take on the mantle of Cobra Commander. Paoli refused until he was persuaded by their other ally, Centurion. The Secret of the Mummy's Tomb

After completing preparations for the Project Ice Man facility in Brasnya, Doctor X radioed her allies to inform them of her progress and boasted that she'd like to see the Revolutionaries try to take them on. The Iron Klaw

Despite her confidence, she still planned to get clear of the facility after she readied the M.A.S.S. Device to transport Kreiger and Ironblood in to finish their scheme, believing the heroes would be quite cross when they discovered what Ironblood and co. had been doing to the Atomic Man. Strange Visitors

With Kreiger now in custody of the Revolutionaries at an Onyx facility in Buenos Aires along with the Talisman, Doctor X and Storm Shadow infiltrated the facility as part of a plan to retrieve their ally and the artifact. As the plan went into motion, Doctor X made her presence known to Ian and Bryce, holding the two of them at gunpoint. When Eagles Scream

After shooting Bryce with a stun gun, Doctor X smirked and remarked that she felt a twinge of pride when Ian was able to bring himself to shoot at her in retaliation. What she didn't realize was that Ian wasn't actually aiming at her but rather the locks of the containment pods for the mutated citizens of Schleteva. With the hordes of mutated civilians chasing after her, Doctor X barely survived long enough for Metrotitan to broadcast a wave of energy that cause them to become human once again. With her and Storm Shadow remaining at the Onyx facility while their allies teleported away, Doctor X and her ninja partner staggered over towards the Talisman. Ignoring Mayday's calls for her to stand down, Gale apologized to Ian for what she was about to do, wishing that he would've joined them, and teleported away with the Talisman in tow, causing another wave of mutating energy to surge in her wake. Though Ian was almost turned into one of the Dire Wraith-like creatures, Centurion having a last second change of heart spared him and the other humans from that fate.

With the cabal now grouped back up in the Iron Klaw's castle, Doctor X gave an affirmative "Yo, Joe" in response to Ironblood's call for his ultimate plan to finally be put into motion. Ghost in the Machine

While Ironblood and the others began their attack on Cybertron, Doctor X remained on Earth, with Dial Tone locating the Doctor and keeping tabs on her. First Strike #2

Doctor X was amongst the heroes and villains gathered inside Trypticon to defend the Earth against Unicron. Unicron #5