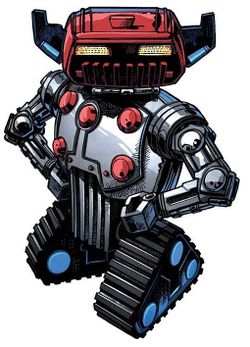 Microtron is Oziron Rael's first mate aboard the Heliopolis, a job he takes very seriously. So seriously, in fact, he'll usually stay on the ship while the rest of the Micronauts do the fighting. However, when the chips are down, he'll always be there to back the team up. Microtron possess a quick wit and a sharp vocal processor. Even sharper are his skills as a pilot and mechanic, something which serves well on board the Heliopolis.

Microtron is a third generation MT class robot, built in a Blic Factory on Micropolis-10. He first met Oz Rael while both were under the employ of Hezlee Ferro. He and Oz, along with their crew, ended up in a fight with the Clemens Raider Crew. During the battle, the Clemens brothers slaughtered the entire crew, save for Oz and Microtron who managed to escape. However, one of the Clemens also died in the carnage and the family vowed revenge, forcing the two to go on the run. After retiring from Ferro's employ, Microtron was recruited by Oz to serve as pilot for his new ship, the Heliopolis. The pair's partnership became a life-long friendship, with Microtron serving as Oz's first mate when new members joined their crew. Microtron profile

At some point after the Micronauts returned to Microspace, Microtron and Biotron became damaged in battle. In order to save them, the two were wired together into a single being, with Microtron's head in the pilot seat. Micronauts Annual

When Baron Karza obtained the Orbsah Gem and captured Optimus Prime, Snake Eyes, and Rom, the Micronauts detected the damage this would do to Microspace. Aw Yeah Revolution! #1

The Micronauts attacked Karza to put a stop to his dastardly plans. As the rest of the team fought Karza, Microtron freed Optimus Prime, Snake Eyes, and Rom from capture. Aw Yeah Revolution! #2