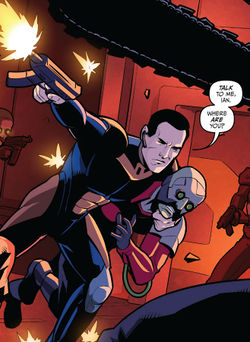 Mike Brogan was made Action Man at some point between 1994 and 2008. While working under Director Cain, he was sent based on intel from Mercy Gale to where Doctor X was mutating college students. After breaking through the roof, he was able to subdue 1500 mutants and they were able to be returned to normal. Unknown to Brogan or anybody but Gale, Doctor X was killed when a piece of rubble from Action Man's entrance fell on him. At another point, Brogan saved the President of the United States from a duplicate. In the process, he made a copy of the O.S. codex, to gain leverage over the United States. Mr Love and Justice

Later, an intrepid Ian Noble broke into the Action Man Programme headquarters and Mike Brogan was sent to handle the situation, preferably by shooting the boy on sight. However, he was quite impressed by Ian's mental and physical skills, Out of the Way and invited him into the programme. The two became close friends. Mr Love and Justice

In 2016, Ian, on his violation, went undercover in Doctor X's facility in the Thames To the Victors the Spoils and, upon his discovery, her agents accidentally set off her antimatter generator. Mr Love and Justice Action Man was sent in to defuse what seemed to be a maniacal doomsday plot and sacrificed his life by flying the rocket containing the antimatter generator into the atmosphere, where it exploded. To the Victors the Spoils Ian Noble would then become the new Action Man, a position that brought in constant and unfavorable comparisons to his predecessor. Absolute Beginners