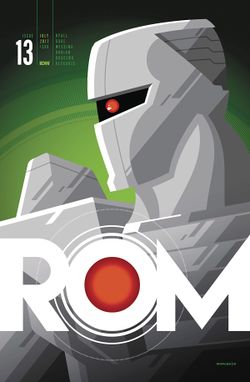 ROM is an ongoing comic series published by IDW Publishing, begun in May 2016, based on the 1979 electronic action figure from Parker Brothers. The series centers on the eponymous Space Knight Rom as he hunts the evil Dire Wraiths that have secretly infiltrated the Earth.

Issue #14 marked the end of the series with the story continuing post-First Strike as Rom & The Micronauts.

He is Rom, Lord of the Solstar Order. Rom, the Wraithslayer. ROM, the Space Knight!

But he must be careful. The Dire Wraiths can assume any form they wish...

The series is written by long-time ROM fans Chris Ryall and Christos Gage, with art by Dave Messina.