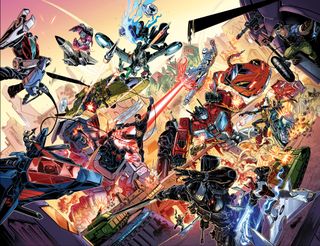 Goku beats Superman in this one, right?

Revolution is a multi-property crossover event by IDW Publishing that includes many of Hasbro's properties, amalgamating the separate IDW continuities into a new shared universe, the Hasbro Universe. It consists of a main five-issue mini-series and eight one-shot tie-ins, running from September to November 2016.[1]

The five issue mini-series was written by John Barber and Cullen Bunn, with art by Fico Ossio. The tie-ins were handled by each book's respective creative teams.

Series launching out of Revolution include Revolutionaries, M.A.S.K.: Mobile Armored Strike Kommand, G.I. Joe, and Aw Yeah Revolution!, as well as the relaunches of the Transformers series More than Meets the Eye and The Transformers as Lost Light and Optimus Prime.

TFWiki.net covers all issues of Revolution that feature Transformers characters in a significant capacity. For information on those issues, as well as Revolution as a whole, visit TFWiki's Revolution page.