"Maybe I'll actually get a toy this time round."

The Shark is a special vehicle developed by Project Spectrum. Normally disguised as a white and yellow Porsche, the Shark has the ability to deploy hidden weaponry, fly, and turn into a submersible vehicle. Its primary pilot is Gloria Baker.

What exact color the Shark is seems to be a mystery.

Gloria Baker drove the (mysteriously orange) Shark to Governor's Island, headquarters of G.I. Joe. M.A.S.K.: Revolution Setting up shop in the Joes' basement, Baker carried out maintenance on the (now white) Shark, before driving it into battle against the Transformers Kup and Aileron in Greece. The Divine Source of Liberty

Baker also drove it in M.A.S.K.'s assault on Autobot City. The New Colossus

After Baron Karza came through the Autobot City spacebridge and Enerchanged with the Dire Wraiths, Baker deployed the Shark's flight capabilities to attack the giant despot. Valley Forge

When M.A.S.K. became compromised and hunted by the authorities, Baker drove her (now blue) Shark in the team's escape from Project Spectrum HQ. M.A.S.K. #1 When M.A.S.K. was attacked by V.E.N.O.M. at Harrison's Cave in Barbados, Gloria used the Shark to evacuate the injured Brad Turner. Miles Mayhem ordered his team to pursue Baker, as he knew the Shark was unstoppable in the water. Despite some close calls, she was able to escape with the aid of Thunderhawk. M.A.S.K. #2

When M.A.S.K.'s boat was attacked by the Tee-Bawb, Gloria took the Shark out to face them. Unfortunately, its weapons proved ineffective, forcing her to hack into the ship's computer with her Aura Mask and force it to crash. M.A.S.K. #3

After stopping Mayhem's auction of prototype Masks in Toronto, M.A.S.K. pursued V.E.N.O.M. through the city, with Shark following Sly Rax's Piranha into the water. However, this played right into his hands as he opened fire on her, forcing Baker to eject from her vehicle After the battle, the damaged Shark was recovered by G.I. Joe and transported back to M.A.S.K.'s headquarters in Miami. M.A.S.K. #5

When V.E.N.O.M. stole the head of the Decepticon Astrotrain from a G.I. Joe recovery team, M.A.S.K. teamed up with the Joes to prevent their rival unit from collecting the rest of Astrotrain's body. Gloria and Julio Lopez teamed with Deep Six, deploying both the (once again white) Shark and the S.H.A.R.C. to the Arctic Ocean. Unfortunately, Sly Rax and the Iron Grenadiers had already arrived. After a brief fight that resulted in an injured Julio, the three were forced to retreat, allowing Rax to take the remains of the Cybertronian. The Deathstone 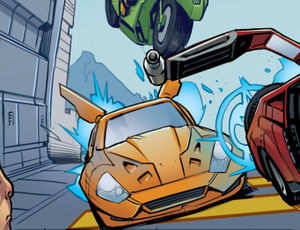 When the Shark first appeared on the final page of the M.A.S.K.: Revolution one-shot, it was colored orange, presumably due to confusion with the Gator vehicle that appeared earlier in the issue. When it appeared in Revolution issue #2, it was given its white-and-yellow color scheme from the original M.A.S.K. cartoon, confirming that to be its proper color scheme.

However, in the first issue of the main M.A.S.K.: Mobile Armored Strike Kommand series, the Shark was colored blue, but still retaining its distinct yellow accents. This new blue color-scheme has been consistently maintained in the main series (save for an issue where it appears purple, but that could be due to lighting, so we won't really count it)... except for the 2017 annual, where it is given its traditional white-and-yellow. The blue-and-yellow color scheme once again appeared in Micronauts: Wrath of Karza and Revolutionaries.

The in-universe reason for the Shark's changing colors has yet to be addressed, but the out-of-universe explanation is easy to surmise. The Shark's appearances in different titles have been handled by a number of different colorists: Jordi Escuin on M.A.S.K.: Revolution and the ongoing, Sebastian Cheng on Revolution, John-Paul Bove on the M.A.S.K. Annual, and David Garcia Cruz on Wrath of Karza. It's likely Cheng and Bove were following the colors of the original show, while Cruz used Escuin's colors from the M.A.S.K. comic for reference. Why exactly Escuin colored the Shark blue in the first place, however, remains unknown.