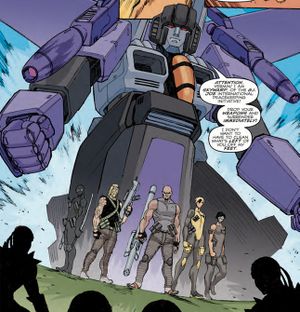 Formerly a core member of Megatron and Galvatron's Decepticons, Skywarp has since hooked up with G.I. Joe as their secret weapon... at least until they can restore his lost teleportation abilities. Despite his bravado, Skywarp might just be growing fond of the fleshlings – particularly Rock 'n Roll.

A long-time member of the Decepticon army Megatron Origin

and amongst the first Transformers to set foot on Earth, Skywarp fought as part of Starscream's infiltration unit, Infiltration

and later under Megatron during his public Decepticon invasion, notably being responsible for destroying the Chinese capital of Beijing. All Hail Megatron

After Megatron defected to the Autobots, Skywarp would return to Earth under the command of the ancient Transformer and newly-minted Decepticon leader Galvatron, who had pledged to repair him after his teleportation powers were disrupted in a fight with the Autobot Arcee. After Galvatron showed that he had no intention of helping Skywarp, however, Skywarp later defected to the Earth Defense Command, who rebuilt him into a new body, albeit one with no teleportation abilities. Robots in Disguise season 2

After the EDC was absorbed into G.I. Joe, Scarlett led a group of Joes on a mission to recover the "valuable asset" Skywarp from the Dire Wraith-infested EDC base at Bikini Atoll. D.T.A.

Subsequently, he agreed to work with their field team in exchange for a promise of having his teleportation powers restored. Though G.I. Joe's scientists struggled to restore his abilities, Skywarp remained part of the team and was a key asset in their struggle against the gigantic, monstrous Fatal Fluffies. During this time, Skywarp began to develop a fairly antagonistic relationship with Rock 'n Roll which eventually became a grudging respect during their mission to destroy the Fluffies' hive. G.I. Joe vol. 5 He and Rock 'n Roll's new "thing" earned them a place on interim Joe commander Shipwreck's fast response team, where Skywarp wrestled with V.E.N.O.M.'s King Cobra mech. G.I. Joe: First Strike

As progress on restoring his abilities continued to stall, it eventually became clear to Skywarp that the Joes were actively trying to avoid repairing him. Because of this, Skywarp got in touch with Duke and offered to join his team in exchange for repairs. To sweeten the deal, Skywarp also offered to bring Snake Eyes and Agent Helix along with him, breaking them out of the Lemuria's brig so they could accompany him. Scarlett's Strike Force He and the escapees later returned to save the day after the Lemuria came under attack by the Maximals. Last Stand