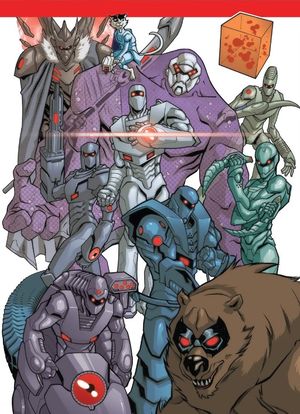 Their name meant to inspire hope and courage across the galaxy, the Space Knights may be all that stand between a free galaxy and Dire Wraith conquest.

They have also been referred to as Solstar Warriors and Solstar Knights.

The order of Space Knights came about after Rom, Livia, and Fy-Laa were exposed to a mysterious ore that turned into suit of armors around the three of them. After the three rookies used their newfound power to slay the Wraiths that were assaulting them, Imperator Carax declared that the ore would be used to make create an army of super soldiers. Orphion and Maur were the first to volunteer. Cold Fire Knights of the Solstar Order profile After a month of fighting, the Space Knights managed to free Elonia from the Wraiths. Long Roads to Ruin, Part 3

When it was discovered that two Analyzers were required to properly assess how many Wraiths were present on a planet, all Space Knights were henceforth required to travel in pairs. Reinforcements, Part 3

The Space Knights eventually took the fight all the way to the Dire Wraith homeworld and destroyed it. Shining Armor #1

From this point on, the Space Knights believed themselves on the verge of victory. Microspace Knight

Around 15 to 20 years after the group's foundation, a new generation of Space Knight cadets was commissioned. They accompanied their senior counterparts on low risk missions as part of their training. While revered within the bounds of Solstar space, neither the Cybertronians nor the Galactic Council were particularly impressed by the stories of the Space Knights. Shining Armor #1

After seeing Stardrive and being attacked by Rom, Ultra Magnus assumed the Knights were in league with the Decepticons and ordered Bumblebee to kill them. Shining Armor #2

After learning of the factionalized state of the Cybertronian species, the Space Knights agreed to reluctant alliance with the Autobots to thwart the Decepticon/Dire Wraith alliance. Shining Armor #3

After the threat had passed, Stardrive decided she could no longer condone the Space Knight propensity for the "greater good" and removed her armor before warping off. Upon returning to Solstar space, Sata was promoted to a fully fledged Space Knight before she and Livia began training even more cadets. Shining Armor #5

An unidentified Space Knight formed a profound enmity with a Dire Wraith that eventually turned into respect that blossomed into a romance. This became known as a "forbidden romance" among the order of the Knights. Asymmetric Warfare

In 2017, unusual Dire Wraith energy signatures emanating from Cybertron prompted the Solstar Order to send the Knights, Nikomi, Guar, Prim, and Butin to the orbit of the metallic world to quarantine it. First Strike #2

After barring the the Carcerians from teleporting in reinforcements, they proceeded to do absolutely nothing to help in the crisis, much to the rage of the Council of Worlds. First Strike #4

They left after the crisis had passed, not having done anything helpful, leading Starscream to feel that the Solstar Order owed Cybertron for their obstructive blockade. The Dead Come Home, Part 1

When Unicron attacked Elonia, the Space Knights were the first line of defence against the Chaos Bringer, engaging him over Optimus Prime's advice. Their attacks against Unicron proved ineffective with the dark god managing to consume the planet. Our Darkest

The few survivors took refuge on Cybertron. Ad Infinitum When Unicron arrived and overwhelmed Cybertron's defences, the Space Knights joined in the planet's evacuation, being teleported to Earth either by space bridge or via the Talisman's magic. Road's End

Along with everyone else, they joined in the diversionary attack on the Decepticon Vengeance Division so Optimus Prime could sneak past with the Talisman and destroy Unicron. Unicron #5