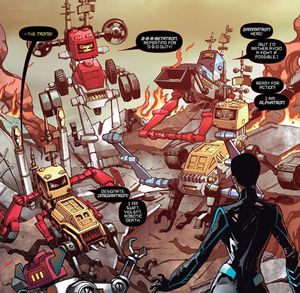 Built from the remains of the destroyed Heliopolis, here come the Trons: the noble Alphatron, the nervous Betatron, the non-confrontational Gammatron, and the maniacal Omegatron! Together, these robots perform support for the Micronauts, able to tear through hordes of enemies and provide a path for the team or hack machinery to give the Micronauts a home field advantage. Whatever functions need to be performed the Trons are able to accomplish.

After Baron Karza's army destroyed the Heliopolis and kidnapped most of the Micronauts, the believed-dead Larissa and Microtron knew they needed backup to rescue their crew. Using what remaining parts of the ship he could salvage, Microtron constructed the Trons. The Trons assisted Livia and Microtron in infiltrating Karza's space-time prison, taking down enemy Acroyear II units and Giant Acroyears. Alphatron opened the prison doors, allowing Omegatron to deliver swift robotic death to more foot soldiers. Once inside, Gammatron was able to open the cell doors, freeing Oziron Rael and Phenolo-Phi. Wrath of Karza #3