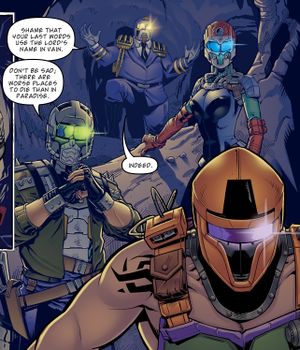 V.E.N.O.M. is a black ops unit headed by Miles Mayhem. Recruited from the ranks of Project Spectrum, V.E.N.O.M. is made up of former members of the Mobile Armored Strike Kommand that Manheim believed to be the most vicious, serving as his personal network of operatives. M.A.S.K. is hot on V.E.N.O.M.'s trail, hoping to take down the criminal organization. However, V.E.N.O.M. has also allied themselves with the reborn Cobra, giving them extra resources to fulfill their plans.

The team is made up of several operators, each codenamed (with the exception of Mayhem and Dagger) after their unique Mask:

Miles Mayhem started recruiting the V.E.N.O.M. operatives early in the days of Project Spectrum, selecting Vanessa Warfield, Sly Rax, and Bruno Sheppard as candidates, with only Warfield knowing of the team. M.A.S.K.: Revolution Wanting to keep his plans under wraps during the Cybertronian occupation of Earth, Mayhem kept them around as part of his M.A.S.K. unit. The Divine Source of Liberty

During the fight against Baron Karza, the various future V.E.N.O.M. agents were believed to have died, with Mayhem seemingly crashing his Switchblade and the others disappearing following the spacebridge explosion. Valley Forge

However, they later turned up alive and returned to Project Spectrum HQ with the rest of the M.A.S.K. team. Tensions ran high between the team, which came to a head when Bruno tried to push the limits of the Rhino, causing it to malfunction and erupt into flames. The rest of the team tried to save Bruno from the wreckage, but Bruno, Sly, and Vanessa appeared to perish as the Rhino exploded. Luckily for them, they were teleported to safety by Mayhem, who had faked his death in the battle with Karza. Mayhem and Warfield revealed that M.A.S.K. was merely a front for Mayhem's real plan, and Sly and Bruno (now implanted with cybernetics to save his life) agreed to join the team and destroy M.A.S.K.! The Origin of V.E.N.O.M. Part 2

When the M.A.S.K. team tracked a cache of Ore-13 to Barbados, they were ambushed by their former teammates, where Mayhem formally introduced his new unit. M.A.S.K. #1 M.A.S.K. was shocked to see their former teammates, including the now cybernetic Bruno, alive, but they managed to fight them off and retreat. M.A.S.K. #2 M.A.S.K. later tracked V.E.N.O.M. to a black market auction in Toronto, Canada, where Mayhem was selling prototype Masks. M.A.S.K. #3 After another battle through the streets of the city, V.E.N.O.M. was apprehended and taken into the custody of G.I. Joe. M.A.S.K. #5

At some point, their three incarcerated members escaped and rejoined Mayhem. V.E.N.O.M. later returned with new recruit Cliff Dagger for an operation at the behest of former Cobra member Destro to recover the scattered body parts of the Cybertronian Astrotrain. Vanessa and Cliff were sent to recover Astrotrain's head, attacking the G.I. Joe squad that was already there. While Destro did supply V.E.N.O.M. with help in the form of his Iron Grenadiers, their plans for Astrotrain were ultimately stopped by the combined forces of G.I. Joe and M.A.S.K. The Deathstone