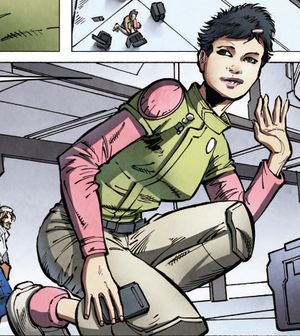 "Oh, don't tell me they're millenials."

Hashtag, real name Aruna Singh, is not the "real American hero" that most would picture when G.I. Joe is brought up. A journalism student enrolled in the Reserve Officers' Training Corps, Hashtag was brought onto Duke's team as an embedded blogger journalist to cover their exploits at the request of Joe Colton's superiors — a request that sat poorly with the team, as Hashtag had never seen combat and didn't even believe in using guns. Despite her teammates' dismissal of her, Hashtag is a decent shot and a highly skilled communications specialist... just don't leave her to make her own decisions in a combat situation.

Her codename is "ironic", supposedly.

Aruna Singh was the daughter of an Army Ranger, born at Fort Lewis in Tacoma. As a teenager, she was a fan of Courtney Krieger and Project: Runway; her interest in journalism led her to study it at Fordham University, enrolling in the R.O.T.C. at the same time thanks to her father's D.O.D. connections. After receiving attention from Boing-Boing for her website mil-brat.dot-com, she was brought onto the newly-public G.I. Joe team as an embedded journalist. Homefront, Part 1 of 5 Despite her efforts to make a good first impression, Duke and her other teammates did not take to her, Siren's Song dismissively referred to her as a "blogger". Homefront, Part 1 of 5

When the team's Skystorm X-Wing was shot down over the town of Warrenton, Ohio during their first operation, Hashtag took cover in an empty building along with Cover Girl and Doc. Homefront, Part 1 of 5 Though their communications were blocked and Cover Girl and Doc assessed that they wouldn't be able to meet up with their teammates again until nightfall, Hashtag presented her own solution by calling for back-up... in the form of posting their location to every piece of social media she could, not stopping to consider that doing so would also alert Cobra and their followers to their location. As Cobra W.O.R.M.S. and civilians swarmed the building, the three Joes headed for the roof, with Cover Girl giving Hashtag a gun despite her protests. When Cover Girl stopped to hold back the pursuers, she managed to fight off most of the attackers, but was tased and captured by the mayor of Warrenton, who apologetically explained that he and the other citizens of the town were forced into working for Cobra out of desperation... but Hashtag, having stayed back, shot him to rescue Cover Girl, an experience that was very traumatic for her. Homefront, Part 2 of 5 Helping Cover Girl to reach the roof, Hashtag and the other Joes escaped the building, with Hashtag bitterly promising to let the whole world know what was going on in the town. Homefront, Part 4 of 5

Having met up with the rest of the Joe team, Hashtag accompanied them in their infiltration of the Warrenton shopping mall to destroy the transmitter that was blocking communications, taking over control of Polly while Shipwreck was injured. When the Baroness came across her in the course of correcting the Cobras' plan, Hashtag held her at gunpoint, Homefront, Part 4 of 5 but when Hashtag tried to interrogate her about her takeover of the town the Baroness was able to turn the tables on her, shooting her in the leg. Hashtag was saved from execution by Cover Girl and Duke, but they were not able to stop the Baroness from detonating the explosives that destroyed the town. Though Hashtag subsequently asked to inform the public of Cobra's recruitment tactics, she was refused permission by the Army brass, including her father. Homefront, Part 5 of 5

Disillusioned after being refused permission to take her story to the masses, Aruna dropped out of university and enlisted in the U.S. Army proper, Homefront, Part 5 of 5 and was assigned to G.I. Joe as a full-fledged member after making her case to General Colton. Siren's Song Inspired by Hashtag's speech about the need to show the "option of heroes" to the world, and noting her secondary M.O.S. in telecommunications, Duke had her report to Dee-Jay as a communications specialist, giving her his blessing to keep the name "Hashtag". Homefront, Part 5 of 5

While deleting the leftover social media accounts from her embedded journalist placement, Hashtag came across an encrypted, damaged video message from "Singer's Son"; though it piqued her curiosity, Duke deemed it a low priority compared to the Threat Matrix, and Hashtag was forced to work on it on her own time despite multiple requests for more resources and the progress she was able to make on decryption. During a G.I. Joe mission against a Cobra missile transport in South America, Hashtag covered communications for the team, and called in the Special Missions unit to extract them when the Joes were ambushed by Cobra Vipers. Siren's Song

As the Joe team completed a training exercise, Hashtag ran out to inform Duke that the Threat Matrix was going crazy, showing three hotspots where potential terrorist attacks could unfold. Threat Matrix 1 of 4 After narrowing the data down to the imminent threats, Hashtag informed the team that they'd need to deal with a major arms deal involving a motorcycle gang, a group of Nanzhaonese militants planning to detonate a dirty bomb in Flushing, and a group of American nationalists plotting a biological attack on the Roosevelt island tramway. Unbeknownst to her, this information was being indirectly passed along to G.I. Joe by Cobra. Threat Matrix 2 of 4

Hashtag was eventually able to decrypt the video file, revealing it to be a request from the Cobra operative Siren, who was begging G.I. Joe to rescue her son from Cobra; however, when she took it up the chain of command, Duke refused to pursue it further. Hashtag subsequently brought the file to Cover Girl, who initially reacted the same way; only when Hashtag mentioned that it had seemed like Duke wanted to bury it did Cover Girl agree to take the matter to General Colton. Cover Girl led a team, including Hashtag, to an island off the coast of North Africa, where they found Siren; however, in the months that had passed since she sent the message, things had changed, with Isaac becoming indoctrinated by the Cobra training camp on the island. Siren's Song

Cover Girl assessed that the team on the island didn't have the required numbers to mount a rescue, but as they tried to leave the compound, they encountered a young girl; though Hashtag tried to persuade her that they were "playing a game", she wasn't convinced, and alerted the whole compound to the intruders. As the Joes changed plans and tried to rescue as many of the children as they could, the floor on which Hashtag and Isaac Craft were standing was destroyed, causing them to fall through to a lower level of the compound; Isaac promised to lead Hashtag out of the building, but was interrupted by another Cobra trainee who pointed out that Isaac was a unit commander, foiling his plan to infiltrate the Joes' ranks. Isaac stabbed Hashtag in the side, and though she fought to try and get him out, she was forced to leave him behind when the other trainee asked to go with her. As the Joes evacuated, Siren was furious that Hashtag had left her son behind, and stayed on the island, unwilling to be separated from him. Siren's Song: Conclusion

As the rescued children were reunited with their parents, Cover Girl congratulated Hashtag on the mission's success, but Hashtag was less than convinced, wishing that the Joes had been able to rescue all of the children. Though she eventually agreed that they had done the best job that they could, Hashtag later rewatched the message from Siren, and sat in silent thought about what she could have done differently. Siren's Song: Conclusion

Eventually, Aruna left the military, becoming a civilian journalist instead. She covered the induction of Earth into the Council of Worlds alongside Cybertronian reporters Circuit and Longtooth; when the ceremony was attacked with an explosion, Aruna encouraged Longtooth to get closer to the action, but changed her mind once Baron Ironblood and his Cobra forces made themselves known. First Strike #1