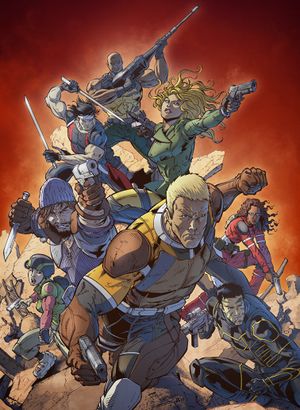 Officially named the Joint Services Special Counterterrorist Group or Counter-terrorist Group Delta[1], the team known as G.I. Joe — named in honor of the legendary Joe Colton — originated as an elite, secretive American special forces unit dedicated to fighting terrorism worldwide, particularly against Cobra, a sinister organisation with far-reaching influences. Recruited from the best of the best, the Joes' members were expected to give up their previous lives and be legally recorded as deceased, with their codenames as their only identities.

The team's organisation has changed multiple times; following the invasion of Nanzhao and Cobra's exposure of G.I. Joe's existence to the world, the team was reformed as a public team of "celebrity soldiers" under General Colton, operating in the public eye (with merchandise out the wazoo) along with a second, secret team that carried out less PR friendly missions. After Cobra renounced violence and began presenting itself as a legitimate group of private military contractors, the team was deemed unnecessary and shut down, but was eventually recommissioned as part of the Earth Defense Command to deal with the threat of the Transformers.

In the aftermath of the "Revolution" event, G.I. Joe parted ways with the U.S. government, and began operating as an international peacekeeping force, taking up the role formerly held by the EDC.

The successor to the Adventure Team, G.I. Joe was founded in 2006. In 2008, following the devastating Decepticon invasion of Earth, they began a secret war against Cobra. Revolutionaries #1 timeline

Things did not did not get off to a good start as budget and funding forever remained a thorn in their side. Enter The Shadow

Nonetheless, the secret war continued to escalate and grow resulting in the nuclear destruction of the country of Nanzhao, G.I. Joe vol. 2 an act only second to the Decepticon invasion in its destructive scale. Secret Raiders

Following this, not only was G.I. Joe known to the public, they were hated and distrusted. This was the beginning of the end for G.I. Joe. G.I. Joe vol. 2

In this new status quo, G.I. Joe operated in the public eye but struggled to carry on as they had before. G.I. Joe vol. 3 The new operating procedure included the creation of groups such as the Admin Force that handled G.I. Joe's paperwork and paid visits to universities warning teenagers about the dangers of Cobra as a means of spreading G.I. Joe's good message to the public. Nothing Will Ever Be the Same Again!

Five years down the line, the sword of Damocles fell when Cobra had reformed itself into a legitimate peacekeeping organization. In light of this, G.I. Joe had to justify its continued existence to the United States Senate. Despite this however, the Joes were still deployed to Schleteva-Galibi border to manage the situation. G.I. Joe vol. 4 #1 Though the mission did not go anywhere near as planned, G.I. Joe vol. 4 #7 it was still a pleasing performance that exposed Cobra's true intentions. The result was a glimmer of hope that G.I. Joe would still be around having proved its weight. G.I. Joe vol. 4 #8

Sadly though, it was not to be. The government ultimately pulled the plug and G.I. Joe was disbanded. Secret Raiders

While many retired some were reassigned to other branches of special forces. Crisis Intervention

When the Cybertronians returned to Earth, The Transformers vol. 2

Ironically enough however, the Cybertronians were the ones who ultimately resulted in G.I. Joe's rebirth. Displeased with Marissa Faireborn's leadership of the Earth Defense Command after Optimus Prime's controversial annexation of Earth, the President of the United States ultimately sacked the girl and replaced her with General Joe Colton, White Light

who brought back veteran Joes prior to the assault on the wrecked Nemesis and incorporated EDC veterans into G.I. Joe, now an elite squad with the EDC. White Heat

Soon however, G.I. Joe was fully reborn when the EDC was dissolved and G.I. Joe became an international peacekeeping force armed with cutting edge EDC technology and weapons. The only real problem was Joe Colton being replaced by a Dire Wraith and using his rank to instigate conflict with the Cybertronians but aside from that, it was business as usual. Things got a off to another poor start when Rom showed up and killed four Wraiths (including Colton) masquerading as Joes. Owing to his armor however, he was mistaken for a Cybertronian and the Joes (well Scarlett and she was scaring everyone else into compliance) declared war on the metallic aliens. Concorde Hymn

G.I. Joe also formed an alliance with M.A.S.K. The Divine Source of Liberty

After the humiliation in Portland, G.I. Joe was sent to Bikini Atoll to retake the base from the Dire Wraiths to retrieve a special asset. The Seeker Skywarp who'd defected to Earth after being mistreated by Galvatron to have his teleportation powers fixed. D.T.A.

After that, Scarlett finally understood that Optimus Prime wasn't a galactic conqueror and G.I. Joe scrambled to Autobot City to aid the other Earth heroes in fighting off the corrupt M.A.S.K. and the Dire Wriaths. The New Colossus

The Joes arrived just as Optimus had finally gotten everyone on the same side to fight Baron Karza and soon joined in. In the aftermath, Rom apologized for the trouble he'd caused G.I. Joe and Optimus apologized for thinking only the Autobots were capable of defending the Earth and offered to work with G.I. Joe. With Miles Mayhem seemingly deceased, Matt Trakker took command of M.A.S.K. and G.I. Joe renewed their alliance with the now heroic organization. Valley Forge

Following that, G.I. Joe was broken up into multiple smaller squads. Talon came to command a Cybertronian response squad. A Lonely Pillar on the Plain

In light of Joe Colton's seeming demise at the hands of the Wraiths, Scarlett took command of the main group of G.I. Joe operating out of the Lemuria (the Nemesis scaled down and made a stationary base) with Skywarp now a member. He was not pleased at having to work with humans. G.I. Joe vol. 5 #1

Members Beachhead and Grunt however went rogue to hunt down Rom believing him to be a threat (and an easier target than Optimus). Reinforcements, Part 1

During Earth's induction ceremony into the Council of Worlds, Scarlett took Lady Jaye and Roadblock with her to Cybertron, along with Matt Trakker and Gloria Baker to combat the rogue Joe Colton. After their founder's planned Cybertronian genocide had been usurped by the Prysmosian Merklynn, the Joes returned to Earth. First Strike Shipwreck was left in charge of the Earth-bound Joes and led an attack on the V.E.N.O.M./Cobra alliance. G.I. Joe: First Strike

Once the Baroness had assumed the mantle of Cobra Commander, G.I. Joe integrated the defunct M.A.S.K. into their ranks. After capturing Cesspool, the Joes learned of a potential Cobra base at the North Pole. Upon arrival they discovered a tropical paradise inhabited by dinosaurs. Scarlett's Strike Force #1

Traversing the jungle, the Joes found an Intruder they dubbed Friday who served as a native guide before they discovered Cobra had tamed the native dinosaurs for use as beasts of war. Back at the Lemuria, Skywarp had discovered that the Joes were deliberately refraining from restoring his teleportation powers and contacted Duke with an offer to join him in exchange for the Ore-13 he needed to restore his powers. Scarlett's Strike Force #2

The arctic team eventually discovered the temple from which Cobra was operating out of but was forced to retreat when the temple was destroyed as part of Cobra's ritual to awaken their god, Golobulus. Scarlett's Strike Force #3