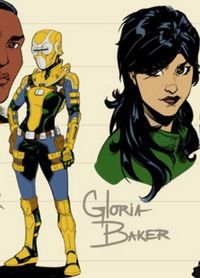 Gloria Baker, born Gianni Batra and codenamed Aura, is a member of the Mobile Armored Strike Kommand. The daughter of an affluent Indian family, Gloria grew up rebelling against her parents, which led her learning martial arts and coding. This skill set serves her well as M.A.S.K.'s IT operations and intelligence specialist. She pilots the Shark vehicle and wears the Aura Mask.

Originally born in Mumbai, India, Gloria's family moved to England when she was very young. Growing up, her parents expected her to "proper lady." Instead, Gloria learned ten different styles of martial arts and how to code. By age 14 she was a master hacker, hacking into NORAD and rewriting missile launch codes. M.I.5 took notice of her abilities and quickly recruited her into their hacking protection. During her time at M.I.5, she was approached by Miles "Mayhem" Manheim to join a special project of his. Gloria Baker profile

Gloria Baker was one of the recruits to Project Spectrum. After the recruits' first meeting with Manheim, Sly Rax tried to hit on Baker, but she was unimpressed with his sleight-of-hand gag and demanded her ID badge back. After the first test of the Project Spectrum vehicles resulted in two recruits' deaths, Gloria was unhappy that Rax and Bruno Sheppard were able to eat after such an event.

When the recruits were given the opportunity to test their specialized Masks, Rax once again tried to hit on her while wearing his Stiletto Mask, accidentally firing a harpoon at her. Baker caught the harpoon, throwing it back at Rax, but Matt Trakker's Spectrum Mask destroyed it before it could cause any harm. Later, during a field test involving a train in the Canadian Rockies, Gloria was forced to stop Matt from rescuing a group a civilians from the train before it exploded. The test left her demoralized.

Baker, Trakker, Brad Turner, and Julio Lopez were eventually deployed to the Governor's Island, the base of G.I. Joe, where Manheim presented them to Scarlett as the Mobile Armored Strike Kommand! M.A.S.K.: Revolution

Gloria was part of M.A.S.K.'s first mission to neutralize the Autobots Kup and Aileron in Greece, deploying weapons from her Shark and focusing her fire on Kup. After the battle, when Matt noticed the robot was in pain, she reassured him that they were fighting for Earth. The Divine Source of Liberty

She once more drove the Shark in M.A.S.K.'s assault on Autobot City The New Colossus

and flew it in battle against the Dire Wraith-empowered Baron Karza. Valley Forge

After their conflict with the Transformers, M.A.S.K. ended up being framed for a series of crimes, forcing them to leave their old headquarters at Project Spectrum. Hiding out in The Dutchman's Doorway, Gloria began running decryption on Miles Mayhem's old Mask they had recovered. When asked my Matt if she had found anything of not on there, she reported her discovery of a series of video files labeled "C. Trakker", referring to Matt's father Cornelius Trakker. After relocating to a secret lab of Cornelius's in Miami, Florida, Gloria asked Matt about his past and the two bonded over tea.

The team then detected an Ore-13 energy spike in Barbados. Going to investigate at Harrison's Cave, they were attacked by a blue jet. The team fled into the cave, where they were ambushed by V.E.N.O.M. M.A.S.K. #1 Gloria noted that V.E.N.O.M. had no digital footprint. This prompted the enemy team to take off their Masks to reveal themselves as M.A.S.K.'s former comrades. Gloria was shocked to see that Vanessa Warfield and Bruno Sheppard survived, but didn't acknowledge Sly, much to his chagrin. While Matt distracted V.E.N.O.M., Gloria and Julio fled the cave, carrying out the knocked-unconscious Brad. Matt told Gloria to take Brad and get him back to the yacht, while he and Julio stayed behind to take on their opponents. Miles Mayhem ordered the rest of his team to pursue Baker and prevent her from reaching the water. However, she managed to evade capture thanks to the aid of the Thunderhawk.

The next morning, Gloria and Matt reflected on the events of the previous night. While discussing their next course of action, Gloria's laptop alerted her that her decryption of the last "C. Trakker" videos on Mayhem's Mask had finished. Matt thanked her for doing this and played the videos, which showed Mayhem murdering Cornelius. M.A.S.K. #2