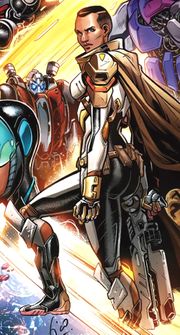 "I've been here all along. It's just that usually I'm behind the black."
"Guess I should start looking to the right more often."

A veteran member of G.I. Joe turned Earth Defense Command second-in-command turned Joe again, Ayana Jones, codenamed Mayday, is a no-nonsense warrant officer with a wry sense of humor. She is currently working with Action Man, Garrison Blackrock, and the Autobot Kup after her first command as a Joe went disastrously wrong.

Ayana Jones was a member of Skywatch before being recruited into G.I. Joe by Duke under the codename "Mayday." She was stationed in Eastern Europe with Big Ben. The Iron Klaw

She also fought in the Nanzhao conflict. Crisis Intervention

After G.I. Joe was shut down, Jones joined the EDC under Marissa Faireborn, and helped them to combat Optimus Prime's Autobots; amongst other things, she, along with Faireborn, acted as the EDC's emissary to their weapons supplier Garrison Blackrock. Robots in Disguise season 2

After General Joe Colton was put in charge of the EDC and reformed G.I. Joe, Jones rejoined them as Mayday. She fought alongside Mainframe against the Transformers in Portland, and was present on Governor's Island when Action Man broke in to rescue Kup; afterwards, she again joined Mainframe in fighting the enerchanged Baron Karza-Dire Wraith hybrid in Monument Valley. Revolution

In the aftermath of the Revolution event, Mayday was put in charge of a G.I. Joe squad consisting of Heavy Duty, Flash, and Quarrel; however, when they travelled to Verenya, Schleteva to investigate the effects of the Talisman, the rest of her squad were transmuted into Dire Wraiths by the obelisk's power. After handing her former teammates over to the custody of the Action Man Programme for their protection, Mayday joined forces with Kup, Action Man, and Blackrock in order to find a way to reverse the Talisman's effects. Revolutionaries