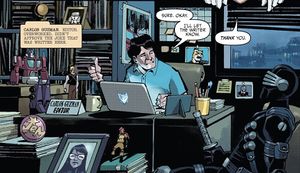 Carlos Guzman is an editor for IDW Publishing.

Carlos Guzman was the overworked editor of Clue. When Upton realized that he wasn't being written like the omniscient narrator he was, he looked out of his panel to complain at Guzman. Guzman (who did not approve this joke) assured Upton that he'd inform the writer to do better. Clue #1

When the comic began to introduce flashback sequences to Colonel Mustard's past, Upton interrupted the flashback to complain once more. Guzman countered that flashbacks are a common device of mystery stories. Upton saw them as unnecessary, but Guzman reminded him of who called the shots on this comic, forcing Upton to back down. Clue #3

In the fourth issue, the tables turned and Guzman was forced to interrupt Upton's narration cutting it short so that they could use what few pages remained for a flashback focusing on Miss Scarlett. He then had to call Upton back to close the issue out, which Upton used as an opportunity to once more complain about the flashbacks. Clue #4 In issue five, Upton decided it was time to give the reader more information about some the events that had unfolded that night. Guzman pointed out that this sounded suspiciously like he was calling for a flashback, though Upton of course denied this. Clue #5

As the book's final issue rolled around, Guzman's continued insistence on flashbacks led to a flashback occurring within another flashback. With his patience thoroughly worn down, Upton decided that Guzman would be the first of Clue's creators to meet their end, something that the butler had to do to assure there would be no witnesses to Dr. Black's crimes. Shocked by a fictional character entering his office, Guzman attempted to plead for his life by promising to remove all the flashbacks but was unsuccessful, meeting his end by being choked by his laptop's charging cable before being shoved out his office's window. Clue #6