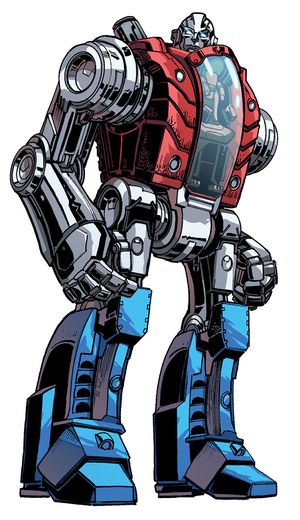 Unlike the rest of his ilk, Biotron Unit 556-01-17 (known simply as Biotron to his fellow Micronauts) is capable of independent thought and actions without a pilot. Since being commandeered by Oziron Rael and gaining full sentience, Biotron has joined Oz’s crew on the Heliopolis. Due to his wealth of knowledge and mechanical intuition, Biotron helps Microtron repair and maintain the Heliopolis. When in battle, Biotron often joins with Oz to reach his full combat potential. He can also enerchange into a tank-like vehicle to serve as transport for the Micronauts across short distances.

Biotron was constructed at a Yomi Factory on Micropolis-10 for use by the Ministry of Science. After his pilot died, he was left in a storeroom on Valtricos Research Station, dormant but still activate. He was still able to monitor the Ministries activities, including the destruction of Biotrons on Saqqura by the Entropy Cloud.

Four years later, Biotron profile Biotron was found by the Micronauts when they were hired to retrieve what they thought was medical supplies from Valcitros. Oz accessed the robot’s systems, learning that Valtricos was not a medical facility, but a laboratory developing biological weapons. They were soon attacked by the Ministry of Defense. Micronauts #1

At some point after the Micronauts returned to Microspace, Biotron and Microtron became damaged in battle. In order to save them, the two were wired together into a single being, with Microtron's head in the pilot seat. Micronauts Annual

Biotron was one of the Micronauts that Acroyear summoned to stop Baron Karza. Aw Yeah Revolution! #1

Biotron attacked the Baron, but Karza used the power of the Orbsah Gem to grow in size, easily knocking Biotron away. Aw Yeah Revolution! #2