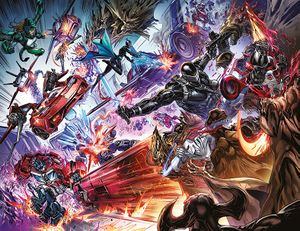 What would eventually become the Hasbro Universe began in 2005. Having acquired the license to Transformers comics, IDW hired veteran Transformers writer Simon Furman to create a new Transformers continuity based off the original cartoon and comics, re-imagined in the style of Marvel's Ultimate Universe. Three years later in 2008, Hasbro released a new G.I. Joe comic which sought to tell a more mature version of the original 1980's stories much in the same way the Transformers comics had done. While Transformers pulled respectable numbers with its many series, G.I. Joe struggled to do so and was ultimately given the axe in 2014. Despite this, the two comics were never written with the intent that they existed in the same universe with both continuities having world shattering revelations and events, particularly the All Hail Megatron maxi-series in which the Decepticons devastated Earth and killed billions or the Cobra Command storyline which concluded in the nuclear destruction of Nanzhao. Even the multi-property Infestation crossover showed Snake Eyes and Optimus Prime existing in separate universes.

In mid-2015, however IDW decided to make many other comics based off Hasbro properties. In March of 2015, Jem and the Holograms was released followed by the announcements of ROM, Micronauts, Action Man, and M.A.S.K. all to be released in 2016. And not long after that, Revolution itself was announced which not only merged the worlds of Transformers and G.I. Joe (as well as reviving the latter) but established a shared world in which they would exist with the latter four properties. The early issues of ROM and Action Man would show signs of this making reference to the events of the All Hail Optimus arc of The Transformers as well as members of G.I. Joe appearing in the Earthfall arc of ROM and the Earth based installments of Titans Return with the prelude issue of Revolution establishing that every scrap of IDW media was being used. As the most successful and expansive book line, the Transformers comics would go onto form the nucleus of this new universe with other comics referencing the Transformers mythos such as Microspace being created by Micronus Prime or the Solstar Order adopting the same hatred of the Cybertronian race as other alien races featured in the Transformers books.

Revolution featured an alliance between the Transformers, Rom, G.I. Joe, the Micronauts, Action Man, and M.A.S.K. to stop the plans of Baron Karza, Miles Mayhem, and the Dire Wraiths for Ore-13. The Reconstruction branding continued on this with many references to other series showing up in the issues following Revolution such as members of G.I. Joe appearing in Optimus Prime and ROM and Dire Wraiths wreaking havoc on M.A.S.K. and G.I. Joe. Revolutionaries followed this by not only having its core cast come from different franchises but featuring a guest star each issue from another such as Rom and Soundwave. Issue #5 of that series would then make the extremely unexpected move of integrating the virtually forgotten Hearts of Steel limited series into the larger continuity.

In 2017, the Hasbro Universe had another crossover in the form of First Strike which served as an introduction for the Visionaries, something that was confirmed to happen at SDCC 2017. At the same convention, it was also confirmed that the Army Ants would be joining the universe as guest characters in Scarlett's Strike Force. Following First Strike, ROM and the Micronauts would be relaunched as Rom & The Micronauts. The Transformers would have two more crossovers with Hasbro properties: Rom vs. Transformers: Shining Armor was mainly a standalone tale, while Transformers vs. Visionaries, released in 2018 set the stage for yet another large crossover.

The final chapter in the Hasbro Universe saga, titled Transformers: Unicron, which debuted in May of 2018, centered around the Transformers villain Unicron. The crossover event served as the finale of IDW's Transformers continuity, and back-up stories in each issue provided closure for the other properties as well. Thus, the Hasbro Universe in its current incarnation is over, but the future of possible new collaborations is currently unknown.

A new Transformers comic launched in early 2019, but no announcements were made about any of the other Hasbro properties until 2020, which saw the release of Rom: Dire Wraiths, a limited run prequel to ROM which introduced characters from Inhumanoids into the continuity.